August 14, 2011
Al awoke at 6AM and according to him, lay there until 7AM when I stirred.  I was rested.  Much more rested then I had been spending the night sitting in a smoker's lean-to... but not as rested had I had a full nights sleep in a dry tent!  Too much excitement for this old man!

We started to get our gear together and the sun WAS poking through the clouds.  We were hopeful that it would be a good riding day.  We were headed to Long Island to visit some friends.  I made coffee - that little stove has earned its keep - and as we drank our coffee we agreed that we would burn through a tank of gas and then stop for breakfast. 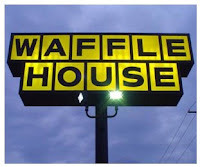 The tank of gas took us to a place off the Interstate just before Hagerstown and when Al turned into McDonald's I suggested that we would get a better meal at the Waffle House.  And indeed we did.  $7 for a large waffle, home fries, two eggs, toast and sausage patties.  Coffee was extra but it was well worth it.  The wait staff were excellent but the kitchen line staff seemed to be struggling.  Confused would best decribe the scene.  Waitresses didn't know which orders were theirs and late comers were getting served before those who had been waiting... as I said, it was worth the wait.  Yum!  Best part of the day... because unfortunately after that late breakfast we caught up to that system that flooded us out last night!

It started out as a bit of a drizzle... and Al thought that by putting on his rain-gear that he could make it all go away.  It was not to be.  It kept getting heavier and heavier and the traffic started to increase and with the humidity eye glasses started to fog up... it was time to stop.

Just past Grantville WV, we parked ourselves under an over pass and tried to wait it out for a while.  Climbing up behind the concrete barrier because standing that closes to that much traffic on a rainy day just isn't safe... It's amazing how much faster and how much more volume of traffic there appears to be from that perspective - so different then when you are in the midst of it.

After a fifteen minute break it looked to be easing off so we started out again...  but it was not to be.  The rain kept getting worse and worse and it just wasn't safe.  Just before Allentown we got off the Interstate, filled up with gas and then went looking for a motel.  We ended up sitting under the canopy at the Hampton Inn trying to decide whether to leave there and go look for another place with a drive up room... or just stay here.  We ended up going in to check on the price and decided that this would be home for the night.  It was 3:15 and we had only made 494 KM.  Not a day for the record books - but we will live to ride another day!

After getting our stuff squared away - and with the rain having abated for the time being - we set off to find some supplies for the evening, had a litte tour of Allentown, and learned yet another lesson about the liquor laws of the Confused States of America.  It Pennsylvania a beer store does not and cannot sell six pack cases.  Six pack cases can only be sold by bars and they can only sell two at a time and they charge and arm and a leg for them...  As Al said, perhaps a round-about way to curb drinking and driving!?!?!

Anyways - we are where we need to be this evening.  Safe.  Off the road.  Dry.  And enjoying each others company... on the Sabbath Road...
Location: Allentown, PA, USA