It is the day after. My head hurts.  I am writing as if I wrote this reflection on Day 4 before Day 5...  are you confused yet?  If so then you might begin to be able to appreciate the space my head is in!

Day 4 began with the Council beginning to consider the previously amended Report of the Working Group On Isreal/Palestine Policy.  The Council carefully worked through the proposal seeking clarity and then listened as two invited guest spoke to the Council.  Both guests were very gracious in their comments.  Unfortunately Dr. Victor Goldboom went overtime.  Even more unfortunately a member of the court rose on a point of order and attempted to limit his time. This is not how we practice radical hospitality.

Perhaps it was by plan or design or just coincidental - however - it was fortuitous that we reached an order of the day and did not move to the motion phase in our process today.  We were allowed to go away and ponder where we are on this journey.

Following lunch we moved into Commissions - and here the real work began.

Add to the picture to the right, a band playing in the corner, imagine your bum in the hard plastic chairs that swivel and squeak and contort a body in strange angles... and them imagine words, words and more words flowing from the light emitted from a projector onto a screen at the front of the room... and a poor volunteer running from person to person with a microphone... and voices, voices and more voices speaking on and on and on... and you have some idea of what it was like to be in Commission!

Jane was right.  Being green was a challenge!!  The first challenge was to devise a way that Commissioners could be aware of the order of the Agenda.

We could not see the Agenda on the screen at the same time as the item presently before us... after a few minutes a wise person reminded us there was a chalkboard in the room!  One of the Co-Chairs agreed to list the Proposals in the order would would consider them.  This was so helpful - BUT - I cannot begin to remember the order, nor can I remember all the details, but let me reflect on a few of the items and the process and implications for the Church...

First, we spent far too much time word-smithing!  Rather than debating the intent of proposals were were trying to micromanage items, forgetting that many of these items had already received significant attention by other courts of the Church!

We began to understand this as we started to debate the proposal from the All Native Circle Conference calling on the General Council to support them as they categorically reject the Northern Gateway Pipeline...  there was good debate.  There was a decision.  And then tweeting started...  The first tweet of a decision fromt he Commission was "The #UCCan categorically rejects the construction of the proposed Northern Gateway Pipeline. #GC41"  As I read this, I saw error in the tweet - a subtle difference - but an important one...  The Commission voted to support the ANCC and BC Native Ministeries Council..." Unfortunately I cannot quote the decision as I do not have the minutes... Alas, a news report has been made by GC41 and you can read it here. 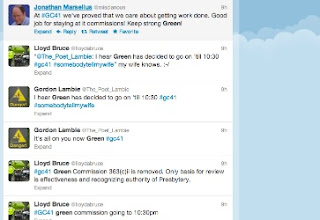 In the midst of the above debate and following it, I spent some time with Cynthia Gunn and a member of the Business Committee seeking clarity regarding when a decision of a Commission becomes a decision of the Council and who is responsible for communicating that decision and when.

I did not receive complete clarity to my questions, but, it would appear that as soon as a decision is made by a Commission it becomes a decision of the Council.

I continue to remain concerned.  Given the world of instant communication we live in, there needs to be clarity in who is responsible for communicating official decision and when.  Search Twitter with the phrases "GC41 purple", "GC41 green", "GC41 orange" if you want some examples of how decisions of the 41st General Council have been communicated - almost as gossip?  Perhaps not with malice but with incomplete even inaccurate information?.

Gossip was also a topic referred to the Green commission... and there was a much debate - even  more time on this topic then on the decision to support the rejection of a pipeline that could affect so many communities in both positive AND negative ways!  Eventually the proposal passed with some amendments...  and then we moved on to some of the proposed Manual/policy changes...

All of the proposed Manual changes were adopted - but not without some struggle - and laughter!  Early in the meeting Cythina Gunn, Legal Counsel for the Church admitted that this was likely the first meeting that she had ever come to without bringing her copy of the Manual... the Chair quipped, "And your sins will find you out." 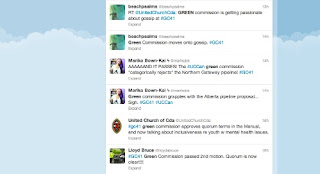 Eventually with a copy of the Manual in hand Cynthia helped the Commission understand the nature of the proposed changes and once it became clear to the Commission that these changes were in support of the simplification of the manual and our processes we seemed to be a little more ready to let go of our word smithing and debating the placement of comma etc.

Its about trust.  And this will be a huge issue for the Church as it seeks to adjust to the new simplified Manual and processes.  We need to begin to trust one another again.  The health of our faith communities will never be sustained by a line in the Manual - but by the relationships we nurture and sustain with one another.  This faith community of ours is not about rules and regulations and restrictions and prescriptions.  Its about trust and relationship.  This true whether we are talking about gossip, the Northern Pipeline, the makeup of Ministry and Personnel Committees the Israel/Palestine issue or most anything else.  Trust.  Trust God.  Trust others.  Be in relationship.  With God.  With one another. 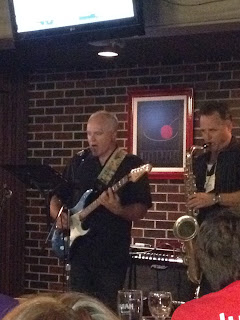 The green Commission extended its meeting time until 10:30 PM and, as a result of the trust that had been created and the relationship that had been established, managed to work its way through all the proposals entrusted to it.

By 11:00 PM I found myself at Mike's with a beer in my hand listening to some music and wearily reflecting on the day... and what a day it was, "On the Sabbath Road..."