Leaving yesterday we headed toward St. Stephen, NB under overcast an overcast sky.  An hour into Maine and it began to pour and did not look like it was going to ever clear... the raindrops were the size of golf balls and the toughs in the road were filling up... there was one pucker moment... and then we stopped at a little country store with an overhang on the porch and donned the rain gear - preparing for the worse!

We no sooner had the rain gear on and Al quipped "Look, its beginning to let up..."  Well, it did and it didn't... and then it did! 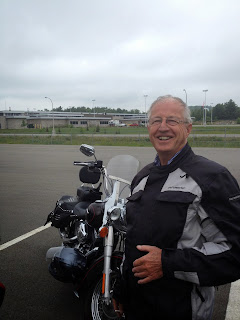 There are many beautiful moments on any given motorcycle trip: a vista on a mountain road, a sweeping left hand turn followed by a tight right hand cure... but one of the most beautiful is the experience of driving out of rain into a clear or clearing sky.  One moment, your glasses are fogged, your face-shield is coated in water-drops and your wind-screen may was well be a sheet of bug screen... and then... there is a brightness ahead.  The water-drops begin to disappear and you can see clearly again - you can almost feel yourself drying out!  And, you know its going to be ok...  It was just past Brewer when we had such a moment... its going to be ok!

US #2 is such an enjoyable ride.  There is always something new to see and the items for sale on the side of the road just keeps changing!  Motorcycles, motorhomes, boats, lawnmowers and so on and so on... seems like everyone in the USA has something for sale at the end of their driveway!  There also seems to be an ever growing number of second hand stores... not sure what this says about the state of the economy but it doesn't seem good.

We arrived last evening in Gorham, NH - a little short of our tentative destination - but we were hungry and tired and it was time to stop.  We settled into a little mom and pop motel room, had a drink and then headed over for supper.  It was my second meal of the day and I ate a little more Chinese food then I should have (and paid for it at bed time) but it sure tasted good going down! 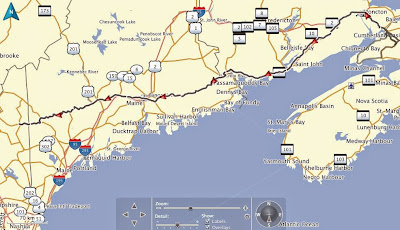 We spent the early evening sitting on the balcony outside our room watching the sun settled into the cradle of the mountains surrounding us and reflected on the day as we connected with folk back home. I enjoyed a couple of local beers, Al had a drink of rum and soon it was time for bed.  Al was snoring before he hit the pillow at 10PM and slept right through to 6:30AM.

We have decided to head north today and follow the road that leads up toward Lac-Mégantic.  This will be new territory for each of us and as we realized last evening, there are not too many roads in this area that between us we have not travelled on!

Our destination for today is Matane, PQ.  We plan to catch the 10PM sailing from Baie Comeau, PQ... we'll see where we end up...

On the Sabbath Road,
Lloyd