After a quick breakfast at the Comfort Inn breakfast bar (raisin bran with milk and a dish of blueberry
yogurt - and coffee of course) I loaded my bike while Al read yesterday's blog entry.  It was a joy to hear his laughter at my recounting of the days events!

We were on the way toward home at 6:15AM (so says the GPS log), and Al set a blistering pace as we rounded the south side of the Baie Des Chaleurs.  To protect the not so innocent I won't recount the speeds we touched... the pace slowed down significantly as we reached Bathurst, picked up again a little bit until we reached
Miramichi and stayed down for the rest of the way.  Good thing too!  We passed three police cars that I counted!!

As we rode I was listening to a folder of inspirational music on the GPS - mostly songs from More Voices and a pieces by a Catholic composer by the name of David Haas.  It seemed fitting as it was Sunday after all!  One of the songs that I have a deep connection to that I listened to this morning is We Are Called.  You can listen to it here.   The words go like this:


1. Come! live in the light!
Shine with the joy and the love of the Lord!
We are called to be light for the kingdom,
to live in the freedom of the city of God!

2. Come! Open your heart!
Show your mercy to all those in fear!
We are called to be hope for the hopeless,
so all hatred and blindness will be no more!

3. Sing! Sing a new song!
Sing of that great day when all will be one!
God will reign and we'll walk with each other as sisters and brothers united in love!

As I listened to this song over and over again I began to take note of the names of towns and villages that we were passing and with each village or town we passed the name of an inmate I have come to know at Springhill entered into my mind... and I was reminded of Al and I's conversation last evening of the place of God in the midst of relationships and how in telling our stories we are made whole... 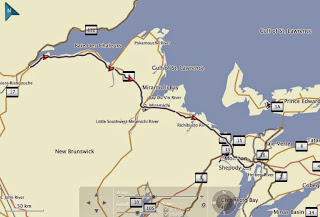 All too soon we were needing gas, and after a quick fill up at the Irving in Bouctouche we were on our way again.

As we came into the village of Meadow Bank (just off the #2 outside of Moncton) I was ready to start cursing a fellow backing up a trailer by the community mailboxes... a few minutes later I was thanking him... seeing him the distance had made me slow down considerably... such that I didn't attract any attention from the RCMP officer with his radar gun out just a little bit down the road!!

We jumped on the #2 for a brief time (I got tired of that quickly) and then exited onto Royal Road (didn't know it was called that until now) and took the back way home through Dorchester.  We pulled into my driveway at 9:39AM - having covered 356KM in just under 3 hours and 22 minutes.

After a quick look at Al's rapidly deteriorating tire (cords are now showing) and with two promises from Al to: 1/ email me when he gets home; and 2/ to stop being such a cheap scotsman and buy new tire... he was off.

The rest of the day has been quiet.  I unpacked the bike, spent some time with the kids, picked up some strawberries, cleaned up some files and barbecued supper... and began to think about the next trip!

I leave again on August 3rd heading to Hot Springs North Carolina to attend the Wild Goose Festival.  Direct, according to Google Maps its 2300 KM.  Three days will get me there but I am giving myself five.  I am at the event from Thursday to Sunday.

On Monday August 12th I fly to Milwaukee Wisconsin to take part in a Courage to Lead event with Parker Palmer.  On Thursday August 15th I fly back to North Carolina, pick up the bike and on Friday morning head for home - aiming to be home by the evening of August 18th so as have the week of the 19th to celebrate with Anna our 25th Wedding Anniversary (August 20th, 1988).

Off the Sabbath Road until then...
Lloyd