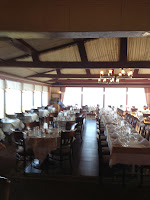 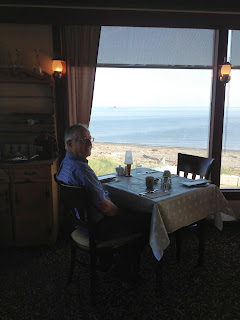 If one had to name a theme for today it would be: In Awe of Vast Beauty!

The day began with breakfast in the motel... the old farts had slept in and we were both hungry and needed to eat before hitting the road.  The breakfast buffet was the easiest options... it was vast in selection: bacon or sausage, french toast or
pancakes, eggs scrambled or fried, home-fries, five different fruits, muffins, cheeses, sweetbreads and jams and croissants and pastries... I had bacon and scrambled eggs and one small pancake... and three cups of coffee (plus the one I spilled on the table)!

It was almost 8AM by the time the bikes were loaded and we were moving... only to need to stop and gas up for the days adventure!  At. $1.39 per litre I was sure glad I wasn't filling the pickup truck with the 40ft 5th wheel that I was parked beside! 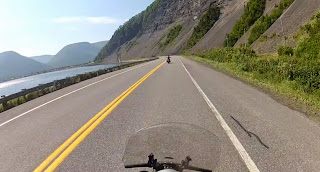 Heading east out of Matane the sheer space before us was almost overwhelming: open ocean on the one side and mountains rising sharply on the other - one could not help but feel incredibly small in the midst of it all.

It was soon clear that sea levels are rising... four huge excavators were at work building a seawall out of blasted stone blocks - fitting the stones together as constructing a jigsaw puzzle.  The only things missing from the picture was a Canada's Economic Action Plan sign!!!!

Around 10:30AM we stopped for a break at a nicely constructed picnic area just outside Riviere-A-Claude.  It was turning out to be a glorious day!

Thirty minutes down the road with Al in the lead we turned right - off the coastal road.  "Wait!"  I said 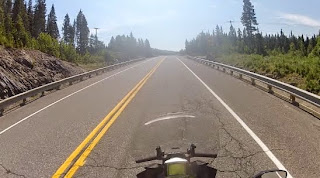 to myself, this wasn't in the plan... He seemed to know where he was going so I tagged along - and am I ever glad I did!

RTE-198 while a little bumpy by times was a road, as Al said, "tests a rider's skill..."  Vigorous changes in elevation, scenery that seeks to distract the eye from the road, and turns upon turn, left and right, right and left... and on and on it went...  through the woods until we popped out - not a Grandma's house - but into the community of Gaspe Bay where we stopped in at the local McDonald's for a coffee and a blast of air conditioned air... it was hot out there in the woods!

After our break Al headed off to get gas and for the first time in his life Lloyd was propositioned... a young woman was hanging out around the bikes while we were in McCafe and she came back after Al had left to get gas.  She struck up a conversation asking where were were from, were we staying in town for the night... all innocent questions... and then she asked if we'd like some company... "No," I said, "I've got gas,... No I mean, I need to get gas... No we're not saying... sorry." And I put my helmet on... and she walked away.  Thankfully. 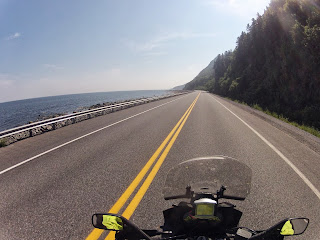 Back on the coastal road things cooled down somewhat - at least until we got stuck behind a moving motel units.... or even worse, a diesel pusher motorhome... thankfully there were adequate passing lanes and no police cars nearby!

From Barchois we enjoyed the view of Percé
Rock and then headed inland again on an unmarked road... Al told me later that he wondered what I was up too... I just shrugged and said, "The GPS made me do it..."   Through farmland and across a number of mountain ridges, past Val D'espoir we got back on RTE 132 just in time for the tourist rush!!  Traffic was slow.  Speed limits were down.  And it was hot. 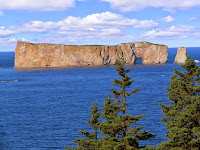 At Carleton we stopped for a bit of a break and enjoyed the breeze off the Baie Des Chaleues.... and watched the porpoises frolic just off the beach... and I filled Al in on the invitation I had to frolic back in Gaspé!  He then told me that he'd been watching her hang out around the bike and wondered even then if that's what she was up to... the wisdom that comes with age!!!

It was shortly after this conversation that I saw something that will, I am sure, contribute to my wisdom over time... a woman vacuuming her driveway!  There is no way to make stuff like this up!!  She had the vacuum cleaner at the end of the driveway and she was sucking up all the little bits of gravel between the road and her driveway...  I kid you not!!!

Forty minutes later we were filling the bikes up with gas at Point-A-la-Croix and ten minutes after that we were checking in at the Comfort Inn in Campbelton, NB.  Upon arrival we had our first crisis of the trip.  The top of Al bottle of rum had become unscrewed while driving and the inside of his saddle bag was now smelling better than a freshly poured rum and coke... as did his spare clothes.  Of course, the first step in remedying the situation is for Lloyd to be sent off to pick up a pint of rum while Al rinses his clothes! 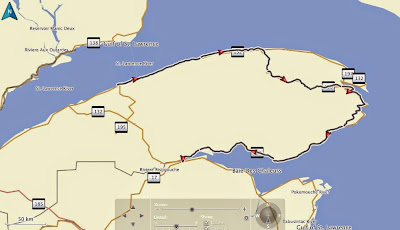 We had a drink before dinner then headed to the restaurant next door where we enjoyed our second meal of the day - and second meal of Chinese food of the trip.  It was not by choice... it was the only thing nearby... we shared some rice, chop suey and chicken balls... and the bill... not a bad meal - but I am sure the sodium content will meet my nutritional needs for a couple of days!!