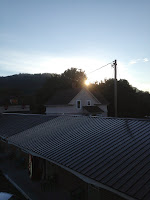 We left New Hampshire with the sun!  We'd decided the night before to burn a tank of fuel before we stopped for breakfast... and so we did... as we travelled west through Dixville Notch to Third Lake where we crossed into Canada... and left some money (duty) to pay for our Canadian way of life!!

After a friendly chat with the Border Officials we set of toward Lac-Mégantic through Chartierville and stopping in La Patrie for a wonderful breakfast at a place called Exquisite Pizza!!  The breakfast was awesome... and saw us through until supper at 9PM on the boat to Matane!!

Scotstown was the next little Quebec village that we passed through.  This Bruce gave a thumbs up to the Wallace behind him the sign passed from our view - the last jovial thought for the next few miles...

After breakfast and a second cup of coffee we'd set off toward Lac-Mégantic.  Yes, we were going to see for ourselves, but we also went out of compassion for a community that was suffering.  Heading into town it was eerie following the railway tracks and seeing the idle rail cars backed up for mile - knowing what lie ahead.  There were detour and warning signs all around and it was clear that the town was being challenged by the level of interest in this situation.  Media vans littered the sides of the road and there was not a parking spot to be found at the local police station.

We followed the main street toward downtown and made a solemn loop around the block on which the large Catholic Church overlooked the wreck site.  It was devastating.  Such a tragedy for so many!

Passing even more media vans making their way into town we headed north and soon found ourselves at Beauceville on a divided highway pointed toward Quebec City.

The closer we got to the city the heavier the traffic got... and it soon became apparent as to the reason for the slow down... a poor fellow in a new car with dealer plates on it (out for a test drive?) rear ended another car in the stop and go traffic... and you thought you were having a bad day when the yolk on your egg broke!!!

Heading east on the outskirts of Quebec City with the sun rising above us - it was turning out to be a fine day!!

gathering at the Bascillia (taking tours I imagine) as well as a number of cars in the parking lot of La CycloRama Mosque (likely for Juma Prayer - as it was about that time).

The further north-east we went the less congested the traffic was!

The views and elevation changes were a riders dream.  Lots of things to look at!  Hills and mountains on one side and a great river on the other with fresh sea air to fill your lungs!

The province of Quebec calls this road Route Balienes... and while
we didn't see any whales we saw lots of outfits offering tours!!  And my mind got to wondering... "Am I nuts... driving 800+ KM just for something to do?  With no destination in mind but the present patch of road in front of me?"  Most people would say. "Yes, he is crazy... and the 71 year old with him is even crazier..."  But I beg to disagree.  I see what this trip and any other trip I've taken as part and parcel of living life to the full.  Those poor folk who died in the midst of their sleep at Lac-Mégantic that could well be me one day.  I could slip and fall on the ice at work and hit my head (as I did last winter) and life as I know it now could just as easily be all over for me...

Perhaps because I have sat beside so many hospital bedsides and buried so many people and walked beside so many people who long for  a life of freedom that I have come to this place of doing what I can when I can - as as much of it in as short a time as I may have available to me... (now that's a long complicated sentence and I don't have a clue how to fix it up... but it makes sense to me!)

This evening after more than 12 hours in the saddle and 863 KM I watched as a group of seniors rode into town on their mobility scooters.  I started to laugh.  I took the picture of them because I wanted to tell Al that this is what most 71 years are riding - in packs - not Harley's!  But as I thought about it I realized a couple of things: 1/ I will be that age one day; and 2/ they we living life to the fullest extent possible for them... and I hope I can do that then too!

Supper was nothing to write home about - and not the healthiest meal I've had in a while - but the options were limited and I needed calories: a hot chicken sandwich (minus the bread) and some onion rings and two bottles of water and a chocolate bar for dessert (first one on more than four months)!

We passed most of the trip across waiting to get our food... and then spent the balance of it walking the deck and talking with some folk we had met in the line.  The day came to an end at the Belle plage where we'd made a reservation at while waiting for the ferry. 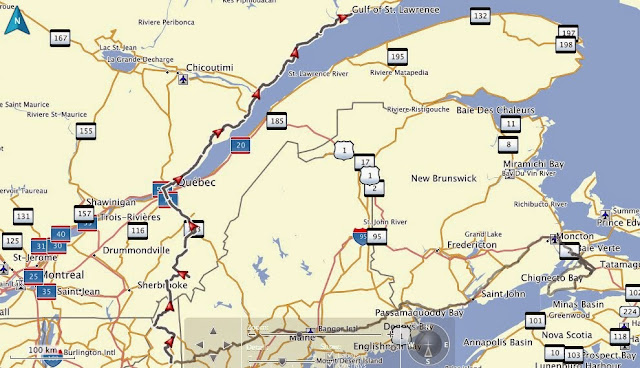 Today we plan to drive around the Gaspé Coast - the distance from here to home via the route we have chosen is a little ambitious (or foolish depending on your perspective) at just over 900 KM... we'll see where we get to... its a beautiful day!  Too nice of a day to pass up! 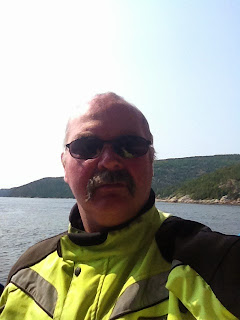 On the Sabbath Road
Lloyd