August 08, 2012
Well, as Zack and Anna sang to me on Sunday evening... "On the road again, I just can't wait to be on the road again... going places that I've never been before..."  Truth is as I headed south into Maine to take a direct route to Montreal (grin) it was hard to find a road I hadn't traveled before!  I was forced to take to gravel - just to change it up!!

But I'm ahead of myself.  I was up early as I usually am on a travel day.  And, after sending a few last minute emails regarding some issues at the prison, I read the paper and scoffed down a bagel with a cup of coffee.  On around 7AM I finished some last minute packing and loaded the bike!  My last view of home was Anna in her liesure wear (AKA pajamas) waving good-bye.  She was looking hot. 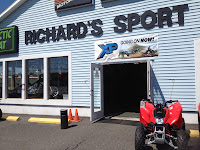 I hadn't filled the bike up the day before and as a result I was forced to stop for gas at the Magic Mountain Esso.  As I finished filling the bike, buddy at the next pump urged me to go in a put in a ballot for the Harley that is to be raffled off... "That's ok bud," I said, "I've got a bike... you go enter twice." and I gave him my receipt.  Hope he wins.  Even more importantly, I hope he looses the mullet and takes the motorcycle safety course!!

With a full tank I set my sights on McAdam and the crossing into the USA.  Before long I was having a chat with the friendly Border Services Officer on the USA and next thing I knew it was time for a butt break.  I pulled into Richard's Sports and looked at some of the new bikes as I got the circulation going in my backside!! 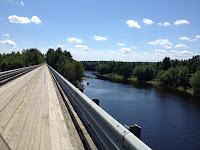 With the circulation flowing I made my way over to Wal-Mart and picked up a couple of cans of stew, a lighter and some other odds and ends.  I had decided I was going to eat lunch on the side of the road.  It was such a nice day and I will be eat out enough over the next 10 days!

A couple of hours down the road (some nice single track pavement and a few gravel stretches for good measure) I came up the rest area beside a lake.  Looks good to me.  I pulled in and no sooner had my helmet off and I heard a Loon call.  Awesome!! 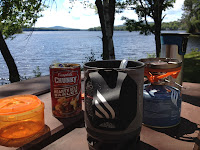 I boiled water for coffee and them put my stew in the Jet Boil and in minutes I had a hot lunch!  Not sure how nutritious it was - but it had to be better than McDonald's or some other such fast food!!

I passed about an hour eating and watching the loons and just as I was packing to leave a mom and her teenage daughters pulled in to walk their dogs: a golden and a chocolate Retriever on one leash... not something I want to do anytime soon!!  And you think Sandy pulls when she sees people Anna... you should have seen these two!!  It took the Mom and daughter to hold them back!! 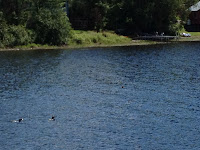 I was making better time than I had expected.  I had sort of, kind of planned to stay in Bingham, Maine.  I had scouted a motel and everything... but I just wasn't ready to stop... when plans change that's when mistakes are made!

I switched onto the route for the 2nd leg on the GPS and it started taking me northwest... that's wrong I thought... but I kept going - thinking there would be a turn more westward soon... No joy.  I ended up turning around and scooting back to Bingham and connecting with Hwy #16 again.

I made a few little side trips: following the Kennebec River Road for a while and then a run up to the main SugarLoaf Lodge... coming on 5PM I was getting kind of tired and needed a place to stop.  I briefly considered taking time to find out how much a room would be at SugarLoaf... but figured it wasn't worth the energy to get off the bike - too much money!!  I passed through Coplin Plantation and there were a few options there - but they all looked just a little too compact for me.  I wanted some space. 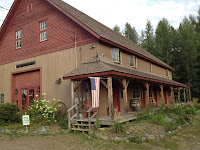 I took a risk and kept on going and just around the corner was Tranquillity Lodge B&B.  The Lodge is a converted barn.  What a beautiful place.  $60 cash for the room and coffee in the morning with a lovely view to boot! 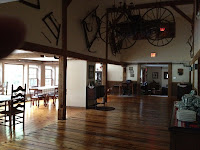 The Inn Keeper wasn't here when I arrived.  I called (via another guest's cellphone) and the guest directed me to my room and in no time I was settled in and ready for supper.  Back in Coplin Plantation there were a few options: the Inn, a Family Diner and the Looney Moose - well - guess which one I patronized!  I had to be looney to eat what I chose from the menu... was it ever good. 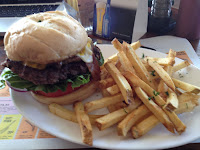 Wolf Burger: 1/2 pound hamburger patty, 3oz sausage patty, bacon, cheese, lettuce, tomato, onions and fried mushrooms along with ketchup and mustard and home cut french fries on the side!  All washed down with a Bud Light Platinum.  I cheated and used a fork and a knife to eat the burger!!   Every last bite!!

With my belly full I headed next door to see what was available for local beer.  I was not disappointed.  Six different Maine Made craft beers snuggled into the saddle bag for the ride back to the Inn.  Heres to hoping I stay awake long enough to enjoy a few of them!!

So far I have had the Shipyard Brewing Company's Summer Ale.  Very nice!  If the rest are as nice as this one I will sleep well this evening!! 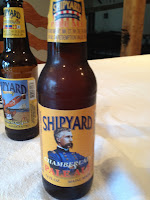 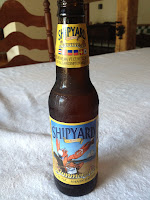 I finished that one as I type the blather above and now I am on to the Chamberlain Pale Ale... Shipyard could stand toe to toe with the Pumphouse Brewery in Moncton.  This is some good beer!!

As I reflect on the day, me thinks that some beer will be needed in Ottawa!  As I was driving I began to ponder the myriad number of proposals and policy changes that are before the General Council as it begins its meeting on Saturday...  choosing the "right" path is as difficult as choosing the "right" path in the maze of roads in the north woods of Maine!  Me thinks that it will be important for the Council to "know where it hopes to be" as it makes choices in regards to the various proposals - realizing that "where we hope to be" may not in any way shape or form resemble where we end up...

It will be essential as we are together to listen deeply for the wisdom that is among us and between us, and to realize that our responses, our choices are contextual and when the context changes, so too may our choices.

As much as I dread the work of General Council I am very much looking forward to connecting with colleagues from across the country and being reminded of what a diverse and committed group of people this United Church is! 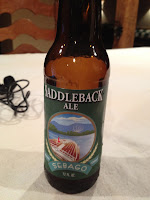 Writing all of the above coupled with a few phone calls to family led to another empty bottle and the opening of yet another: Saddleback Ale by Sebago.  I nice easy beer.  As I drank the Saddleback I was blessed with sharing a conversation with the Inn Keeper, Melody and heard the story of her husband's death to cancer five months ago and the pending changes in her life and she deals with grief and loss and change that is beyond her control.  I am honoured that you trusted me with your story Melody.  Trust your feelings and follow your heart - and may you find peace again.

Post Postscript:
Tomorrow is my birthday.  47 years old.  Last year I spent my birthday on the road as well: travelling from Colorado, across Kansas and into Missouri (http://sabbath-road.blogspot.com/2011/08/day-58-on-long-lonely-roads-and-being.html)  To steal some wisdom from last year's post: "It was a long day... but a good one.  The praires bulk of Maine is are behind me as are the memories of 46 47 years of doing my best to live as fully and as faithfully as possible... and tomorrow the sun will rise again and it will be another day filled with wonder and awe and possibility... on the Sabbath Road..."  Amen.  Amen.  Thanks Anna, Zack and Justin for the cake and celebration on Monday evening!!  Love you all!!