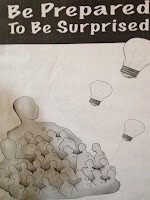 Another full day... and a short reflection to end it as much of it is a blur as a result of some of spirited debate and the energy that this drew from my being.  Worship was again a highlight as was a report from our Global Partners.  You can read a complete account of their offering here... I was so deeply challenged by the words of Miguel Tomas Castro Garcia of Emmanuel Baptist Church in El Salvador:  “The way of life of many in the global North is causing our death. What we need more than anything is for you to help dismantle the system of power and wealth that results in our poverty.”

We wrangled over the proposal to test various models of providing pastoral relations support, oversight and discipline... and eventually a slightly modified version passed.  It will be interesting to see how this proposal is brought to life and how much buy in there is with the various Conferences and Presbyteries.  It was clear from comments from Staff that existing polity within the manual will be adhered to unless and Presbytery agrees to delegate its authority to the Conference...  Our Executive Secretary informed the Commissioners that Maritime Conference has indicated a willingness to the General Council office to explore the possibility of a test site - being very clear that there would need to be much negotiation before there was any firm commitment.  As I pointed out... this will require the willingness of Presbyteries that are willing to delegate their responsibilities of the Conference... I am not sure how long the line will be, but I suspect that one or two in the Conference might be willing to try it out!


Friday was an emotionally draining day for many reasons.  In the morning we heard shocking and heart-breaking stories of the inequalities – the systemic discrimination – of aboriginals in Canada with respect to education funding. We also heard stories of Residential School survivors. It moved us to tears. We must listen carefully. We must journey with them. there are two websites that I strongly encourage you to visit, read, and respond to: www.shannensdream.ca and www.jordansprinciple.ca


And then, we came back to the Israel Palestine motion.  The day before we had passed the bulk of the proposal including a slightly modified version of the following:


9)  Call on United Church members to take concrete actions to support the end of the occupation by:
a. encouraging members of the United Church to avoid any and all products produced in the settlements;
b. directing the Executive of the General Council to give high priority to establishing a church-wide campaign of economic action directed against one or more settlement products that can be identified as produced in or related to the settlements or the occupied territories;


Before us today was the following:

2) direct that United Church policies and actions, in relation to Israel and Palestine, reflect the content of the report;

I could not believe the amount of debate and procedural wrangling that this item in the proposal generated!  The Moderator had to rule on an amendment and then the court had to sustain the ruling of the Moderator or not...  drama in the Raven's Nest...

My humble opinion was that members of the court were struggling with the flashback that often follows faithful response.  The media had been hard at work, the headlines were bold, and perhaps we did not take enough time to debate the idea of "encouraging members of the United Church to avoid any and all products produced in the settlements".  Perhaps we should have taken a longer view of the wisdom of "directing the Executive of the General Council to give high priority to establishing a church-wide campaign of economic action directed against one or more settlement products that can be identified as produced in or related to the settlements or the occupied territories"... so there was a motion to reconsider... which failed.  After a couple of attempts to amend #2 above we ended up with a broader motion that reminded members of the Church that any participation in any economic action, in the end is a personal choice.  Such is the journey of faithfulness for each of us: what will I choose or choose not to do today?

A colleague on his blog explains it this way:  "We did NOT vote to boycott Israel.  We did NOT vote to boycott the Israeli settlements.  We DID vote for a “campaign of education and economic action on one or more products of the occupied territories…” Education first, then a possible action on ONE or more products. That is not a boycott, it is a symbolic action against those who would profit from goods produced in lands that are illegally occupied according to international law.  The report and motions are so carefully worded and nuanced that a simple understanding and explanation is impossible. If someone tells you they can sum up The United Church’s position on Israel/Palestine in a few sentences they are lying!  In the end I prayerfully voted in favour of the proposal. I struggled mightily with it, but in the end the tipping point for me was hearing someone suggest that because telling your friend that they are wrong is hard to do and they might get mad then you shouldn’t do it. Jesus taught justice, not niceness. I believe the occupation is illegal. I believe profiting from illegal things is immoral. Therefore I had to vote in favour. This is not the definitive position and solution to the Israel/Palestine crisis. It is just a sliver. It cannot say everything, but to stand by and say nothing is unacceptable."


Bruce Gregerson attempts to explain the motion in a video clip here.

By 5PM we were set free from the nest to gather with our Conference colleagues to return at 6:30 for a feast - and what a feast and celebration it was: traditional foods of first nations people including wild rice and salmon! 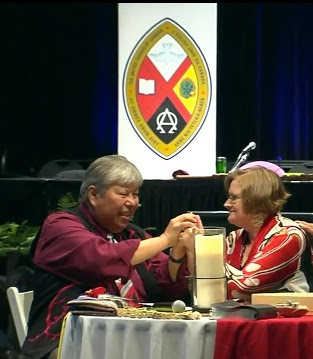 Following the feast Moderator Mardi Tindal and Ray Jones, Chair of the Aboriginal Ministries Council signed an historic new covenant recognizing the presence of Aboriginal people in the church since its beginning.  Lorna Standingready was invited onto the onto the platform as the covenant was signed - two amazing women of faith!!!

With the covenant signed (you can watch a video here) we were then led in worship by members of the All Natives Circle Council and the Aboriginal Ministries Council.  An historic event as we continue the journey of walking with each other, living our the words, "all my relations".