We began the morning looking at a proposals on a Statement on Ministry and for a study on "local ordination" as it may apply to those who are currently Designated Lay Ministers.  After a significant amount of debate and some word smithing both proposals were adopted.  Now it was back to the amended (and now revised by the court) motion from the Working Group on Israel Palestine. 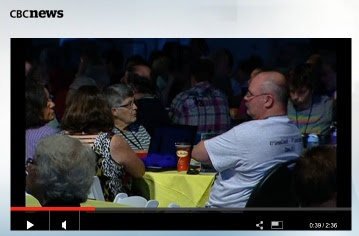 As we moved into parliamentary procedure I was deeply conscious of the energy in the room.  Folk were keenly aware of the significant this decision would carry.  Speaking for myself, I knew that to vote in favour of the proposal was, in a very small way, stand with the men women and children of Palestine who have watched as more and more of their land has been taken over by settlers.  It was to say, enough is enough to the Israeli government, who in the past year alone has welcomed 4000 settlers to the Sate of Israel.  By holding up my ballot card in favour of the motion as it was before us was to remember that Jesus called us to stand with the most vulnerable of society, to speak truth to power and proclaim love in the face of hatred and peace in the face of violence.

It is important to note that the resolution calls on members of the United Church community to avoid product made in the settlements.  It is not calling for a boycott of all products made in Israel - only that we avoid those products produced on occupied land.

The issues of land, people and politics in Israel/Palestine is a complicated one - proclamation of the Gospel in the face of such complexity will to some, seem foolhardy, ignorant, or for some downright out of place...  I disagree.

Speaking truth to power:
the expansion of the settlements must stop.
the continued building of a wall to separate people must stop.
using women and children and human shields must stop.

The violence must stop.  On all sides.  For this to happen their needs to be willingness to listen.  And perhaps that with the International Community and faith communities around the world paying more attention to the situation in Israel/Palestine - those who are immediate neignours may begin to listen to the pain of each other and make real changes for peace...

My reflection above is by no means complete...  I urge you to do your own research.  Consider the history.  Look at the statements from the United Nations.  Listen to the stories of those whose homes and farms have been taken away.  Listen to the weeping of mothers who have lost children on both sides.  Do this, and perhaps you might arrive at the same place as I - that this action of the United Church of Canada, an action similar to that taken by Methodist Church (USA) and Presbyterian Church (USA) is a small step toward proclaiming God's realm of peace and justice in the world... 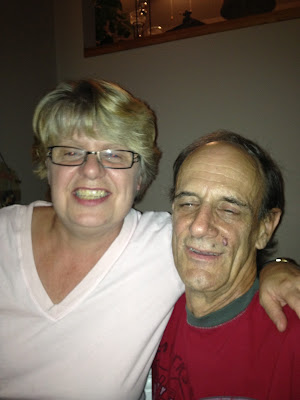 Exhausted at the end of the morning I was unable to do what I had planned: a motorcycle ride in the Gateneau Hills.  Instead I did a load of wash and read and napped.  At 5PM I headed out to visit a cousin I could not remember ever having met before.  Donna is the daughter of my mom's brother and she grew up in Thompson, Manitoba.  We connected on Facebook through a mutual friend.  I so enjoyed my visit with her and Angus and Trevor!  Thanks so much for the chance to meet you all and hear and share some stories!  We must do it again - before another 30 years pass!!!

Returning to the campus, I parked the bike and was swept up in a crowd heading to the local pub... I had a night cap with them and then headed off to bed.  I was asleep before I hit the pillow.  On the Sabbath Road...