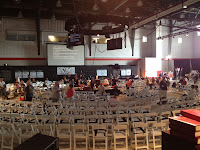 What an amazing day!  Upon entering the Raven's Nest, I was drawn into the energy of the circle of faith (not unlike the experience of circles in the Chapel at Springhill Institution each week).   Asiles leading from each of the four directions invited one to enter with their body.  A sax, supported by an electric guitar and voices of many singing songs of  gathering invited the heart to enter - and enter I did - fully into this experience of Open Space.

Following worship and reflections by two of our world partners the facilitators outline the process for the day.  In my experience of leading groups I was familiar with the process and have used it - but never on such a large scale (I missed the exercise at Maritime Conference as a result of commitments at the prison).

There are three principles of open space: whoever comes are the right people, whenever it starts is the right time, whatever happens is the only thing that could happen.  In addition there one law: the law of two feet/law of mobility.  Within the law there was freedom to be bumblebees and butterflies... those who move between conversations as the wind calls them.

The facilitators took time to explain the proces in both official languages and then invited folk to come forward and identify conversations.  These were then posted under various time slots on a wall of the space, identified by with host, time and gathering place (a stick with a windmill on the top).

There were three time slots and we were informed that we would cast ballots after prayer before the Open Space began and between each identified time slot as was needed according to ballot results. 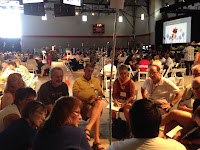 Moderator Mardi Tindal was such a gift.  She invited us to quiet places in our hearts, called us to prayer and reminded us of the presence of the Spirit as we cast ballots. 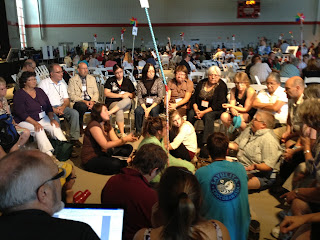 I was so deeply touched by the sharing of some of the young folk in the circle and their conviction that the church must be an open and inclusive place and how they envisioned that being so for released inmates.  Others spoke of the church as needing to be "a soft place to land" and needed to learn more about the over representation of First Nations folk in our prisons.  Before we ended our time together we took a record of our email addresses and committed to continuing the conversation.  Helen Bickle and her interpreter led us in prayer and then, as the next ballot was called, I took the notes that Miriam had taken, typed them up and they were submitted and will be part of the record of the Council.  More importantly for me - I will have them... and will read them each time I am discouraged and need to be reminded to the connection and commitment that the United Church of Canada has for the men and women who are incarcerated!  Thank you.  Thank you.  Thank you!! 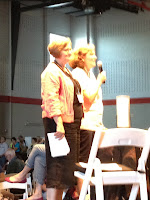 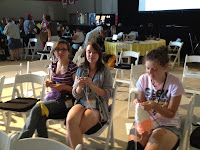 The conversations continued and slowly almost painfully the list of names on each ballot became shorter and shorter.  If there was one frustration of mine - it was the numerous instances of the phrase "moving forward".  It should be banned.  It is a phrase I here within the Correctional Service of Canada all too often!!!  Of course we are moving forward.  Even moving backwards we are moving forward!!  At one point I responded to a tweet and suggested that "these are the names of those being carried forward by the Spirit..."  And this was indeed how it felt... we were being carried forward in the Spirit - in the labour pains of birthing a new Moderator form this Council.  Each call for a ballot was a call to prayer.  Each prayer was one of gratitude and invitation. 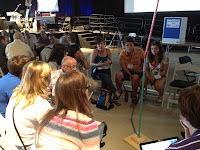 And the conversations continued: French ministries, an association of clergy, inter-faith dialogue, and the list went on and on... such energy and passion.  Such a presence of the Spirit - allowing for the diversity of being - yet we were and are one in God!

As we waited for the result of the final ballot we came back into the holy circle: from the four directions, reconstitution the circle of being as we gathered our hearts and minds.  In sacred circle we shared words, written on foot prints that spoke of our journey: where we had been led today and where we as a Church are being led.  The microphone was passed from person to person words and phrases of the heart were offered into the circle - God was there in the still-point of the circle.

Then came devotions to mark the end of the day followed by the announcement we had been waiting for.  John Young and Gary Paterson had been the two who were carried by the Spirit onto the final ballot and when Gary was introduced a moderator the Council erupted into applause!  All of the other nominees moved to make the vote unanimous and greeted hin with great love...  and then, Gary spoke and some of us were moved to tears by his passion and commitment for the Church.  He ended his remarks by he quoted the whole of e.e. cumming poem, I Thank You God from memory:

i thank You God for most this amazing
day:for the leaping greenly spirits of trees
and a blue true dream of sky;and for everything
which is natural which is infinite which is yes

(i who have died am alive again today,
and this is the sun's birthday;this is the birth
day of life and love and wings:and of the gay
great happening illimitably earth)

how should tasting touching hearing seeing
breathing any—lifted from the no
of all nothing—human merely being
doubt unimaginable You? 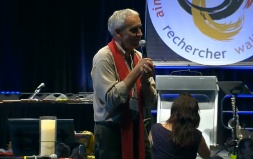 As he sent the Council for supper he offered his favorite scripture verse Eph.3:14-21 "Glory to god who is able to do so much more than we can ask or imagine." And encouraged us all to "Ask BIG!"

It's going to be an amazing three years filled with surprises, challenges, opportunities to walk our talk and live the love that calls us... and likely a bit of poetry too!

Congratulations Gary!  You will be a gift to the Church!