August 18, 2012
Saturday morning.  The end is in sight.  I was up at 5AM and got everything packed away and then I went to get the motorcycle and found it tangled in police "Do Not Cross" tape...  I saw no evidence of a crime scene and in that moment remember hearing something about cars needing to be gone from this space by 7 o'clock.  I thouught it was to be 7AM - must have been 7AM.

I toddled off and filled the bike with gas and then drove up to the residence building and loaded all my stuff.  I was ready to go...

The dining hall opened at 6:30AM and I was there soon after the doors opened.  I enjoyed a quiet breakfast tucked out of sight in a corner... I began to realize that I was in social overload.  I needed time to myself... and I think this is why I have been so tired all week.  Ten and tweleve hour days filled constantly with people is not good for this introvert!!

On about 8AM I headed over to the Raven's Nest and took up my seat at my table preparing for this final day.  The last two hours were spent dealing with empowering motions, saying good bye to table group members and acknowledging the gift that has been the person and leadership of our now past Moderator, Mardi Tindal.  Here is a tribute video to Mardi's term as Moderator.  We also took time to thank the many volunteers and staff who made this General Council possible and by 10:30AM we were ready for a break before worship began.  I was ready for more than a break.  I said my final good byes to a few folk as I left the space and then I hit the road...  I needed to ride.

For the first few miles I felt a little guilty about leaving early and missing the installation of the Moderator but as the road unfurled before me I began began to feel more comfortable with my decision - part of commitment to community is commitment to self care.  I was tired.  I was overloaded mentally and emotionally and I needed time to myself. 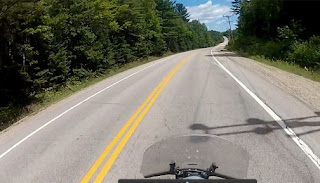 My destination was Montreal.  I had made a commitment to preach at Northlea United Church where my friend and colleague Helen Hliaris is the ministry personnel - but I headed due north. I wanted to ride through some of the Gateneau hills and explore some of the area around Mt. Tremblant.

Enventually after many enjoyable kilometers I reached Grand Remous and turned south east where I fueled up in La Macza and continued south. 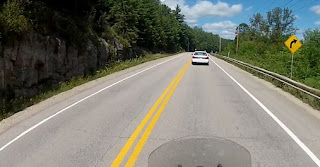 Following a police car for 90 kilometers on a motorcycle is in no way fun!!

Despite the slow pace for that 90 klicks I eventually made it to Laval and was greeted by Andrew and Helen and Clancy and invited to join them around the pool.  Ahhh.  It felt good.

A little later that evening after checking in with family, we walked over to the local Indian restaurant and had a feast of butter chicken, curried beef and vegetables and fresh nain bread!!  Scrumptious!!

Returning from the restaurant I set to work to put some thoughts to paper for a meditation for tomorrow - but as the clock struck 10PM I could stay awake no longer and made my way up to bed...


You can see it all here.

On the Sabbath Road...  below is a video I put together on Sunday morning as I was writing a sermon to offer at Northlea United Church.  Comments welcome!!