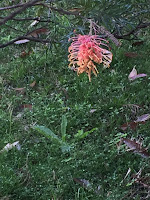 Second full day of the conference... and it was full!  Beginning with breakfast and devotions followed by a very informative lecture by Ulrica Fritzon from Sweden on the place and value of restorative justice within Chaplaincy.

As lunch was preceded by some free time, Peg and Greg and I headed to the town of Lane Cove… about a 4km walk… uphill for lunch.  We didn’t think it was that far… but it was and we made it – with some encouragement for Peg of the reward at the end! 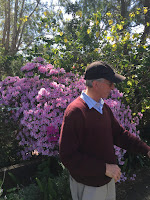 Along the way I was admiring flowers and taking pictures.  I’m captivated by the beauty and diversity of the foliage and flowers… and it was as a result of this that we met Bill who was tending his garden.   As we said hello, he proceeded to take time to identify some of the plants and trees for us, asked what brought us to the area and then… he invited us to dinner that evening.  I love these encounters when travelling!  Peg and Greg declined as they were going to the Opera House that evening… but I accepted, making plans to return at 6pm and he said if there was time he’d take me on a tour!  Little did I know what was in store for me! 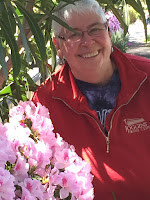 Eventually we made it to Lane Cove and found a restaurant in the town square – what a lovely space – a pedestrian mall creates such a sense of community!  Lunch consisted of panko-breaded fish and battered fries with a local beer and it was all "some good" (as they say in Newfoundland).

Returning to the venue we engaged in the workshops we’d signed up for, I offered leadership where I’d volunteered to do so and as a result had some deeply engaging conversations with colleagues near and far… and as a result, left feeling affirmed for all that I have offered.

On about 6pm I met up with Greg and Peg who had arranged for a cab to take them into Sydney and I jumped out of the cab at Bill’s home – a large stately stone home at 71 Tabbourine Bay Road, surrounded by beautiful gardens.  Bill met me at the door and informed me that we were heading out “straight away” to go on a bush walk and a little cook’s tour… I passed him the bottle of wine that I’d brought and he graciously accepted it even as he told me that he and his wife did not drink alcohol.  That little awkwardness aside – we headed out… 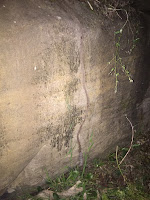 First stop was the trail that runs along the waters edge.  I’d travelled some of the trail previously, but what a different it makes to walk with someone who knows the area.  Bill told me about the local termites, showed me their trails and nests, shared some of the history of the area, walked me to what used to be the only source of water for the community, one of the few natural springs in the area… and was generally a wealth of stories and information!  You cannot plan such encounters!!!

It was dark now… we safely made it back to the car and set off on the
“cook’s tour” that took us to Neutral Bay (where ships regardless of nationality or state of war with the commonwealth could find safe harbour for repairs and resupply), the official residences of the Prime Minister (vacant at the moment… and Bill was looking for good trash at the curb), Governor General and a tourist park on the north side of the harbour where we drove under the Harbour Bridge and he graciously allowed me to take some photos of the beautiful cityscape! 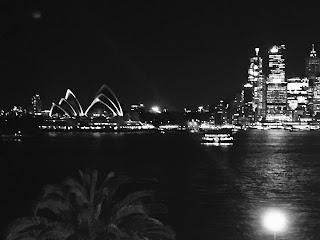 Before returning to Bill’s home he stopped along the way at a friends home that he was looking after as they were on an extended vacation to ensure that their son had put the “wheelie bins” at the curb side garbage collection.

In no time we were back at the house where his daughter Eleanor had prepared a wonderful meal of lasagne and salad for us.  A friend of their family, Eileen from the southern highlands was present as well and a full and lively conversation ensured as they shared with me and I with them.  We were not long into the meal when Bill’s wife Louise arrived home from her medical practice and joined in the conversation.  Bill graciously opened the wine I had brought and Eleanor and I each had a glass with our meal.  It was fascinating to hear of Louise’s work as a GP and other Australian medical system, her travels as a doctor to the various pacific islands and of Bill’s career as a communications – and of their deep and abiding love for the land they live on.  The meal concluded with ice cream (richest ice cream I’ve ever eaten) and a tour of their great room where I had the opportunity to appreciate some of their art collection and Louise’s collection of handmade woven bags from around the world. 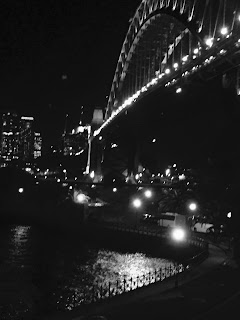 about connecting and building relationships.  To connect is to meet people where they are at – and trust what they offer at face value, and be open to the experience as it may unfold.

All too often our relationships (especially familial) get hijacked by our individual biases and judgements, our own histories and struggles, and we don’t really hear what the other is offering, because our filters get in the way.  I know this to be true for me – and I’m working at trying to be more aware of this tendency and as a result, be more open… not always easy when dealing with your own hurts and worries.

The walk home from Bill’s home was a quiet one… in the pitch dark – not a street light in the area until I drew near to the college.  I had a few stumbles along the way as I tripped over sidewalk slabs that had been pushed up by the roots of trees along the way – a good metaphor for growth: that the growth of one, is not always easy for others – sometimes tripping them up and unsettling their world.  But in the end… the tree cannot cease its growth – to do so is to die… and so, we make our way, cautiously, sometimes stumbling, in the dark… toward the light… on the Sabbath Road…