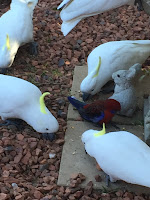 After a wonderful breakfast at Lurene House, in the company of a pandemonium of parrots... yes, thats what you call a group of parrots... and it fits given the noise they make as the vie for a place at the feeding trough!

The hosts of the Lurene House are both originally from Cambridge and met while travelling in Australia as young people (that's a common theme I've noticed).  They returned from a backpacking trip to Cambridge 22 years ago and six month later were emigrating to Australia.  11 years ago they began running Lunene House and it is so clear that they both enjoy what they do.

I ate early and both came regularly to the table to speak with me, talking of the climate, events going on in the area, their travels etc... and as I was loading the bike others joined in the dining area and it was such a hubbub of activity.  Such community as they took me table to table and introduced me as the only North American in the house that night...

Having been introduced all around I jumped on the bike and headed out.  First stop was the lookout over the Three Sisters and then... I rode. 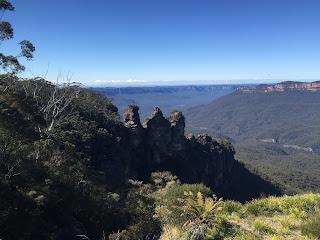 Whoever planned this route sure knows good motorcycle roads.

From Katoomba I took the road towards Blackheath and Mt Victoria.  Along the way I passed Govetts Leap and then kept going to Bell where I turned onto the Bells Line of Road.

This was spectacular riding along the edge of Mount Banks - almost like an escarpment with vertical drops on each side with many curves and elevation changes - and no places to stop for pictures... and so I rode...

Kurrajong Heights lookout would have been a good place to stop for a picture but it came up on me so fast... and driving on the left has me a little dubious about doing U-turns.  I just don't feel safe.  So I motored on.

I really should have stopped for apple pie at one of the many vendors along the next stretch of road.  All kinds of apples were for sale... and you could literally smell the pies cooking in the many cafes and bakeries along the way... but the road kept me engaged...  I was in a groove.

Descending down Bellbird his was an interesting experience... tight turns behind a heavily laden truck going down in a very low gear.  I eventually pulled off and let him get ahead.... and thankfully he turned off as I got on Putty Road.  Wow.  Only way to describe it is wow.

For the next 100km I didn't see another car and the road opened up before me... sweeping turns, elevation changes, an arid wooded landscape unfolding before me - almost like the Pentiction area of BC... and it just kept getting better.

Unfortunately there was a fair bit of roadkill along the way: kangaroos and wombats.  As at home, dusk and dawn are bad times to be on the road... 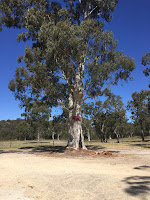 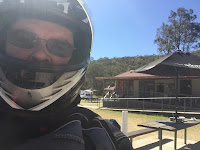 I took my second and third picture of the day at the iconic Grey Gum Café after I had a long black and a piece of their home made apple pie.  At this point I was 62km from my accommodations for the night... and they were some of the most interesting 62km of the trip as I came out of the Howe Valley into the surrounding ranges and then back down into the Hunter Valley.

Its no wonder that this is a popular motorcycling road for riders in the
Sydney area.  While I was at the Grey Gum Café I counter 62 motorcycles - and this on a Wednesday afternoon.  The lady who waiting on me spoke of over 200 bikes being there at a time on any given Saturday.  I'm glad it wasn't Saturday!  This would explain why the local law enforcement has some special motorcycle enforcement areas along this section of road: special signs and markers for motorcycles and warning of radar enforcement.... yes Mom, I was a good boy - I stayed under the speed limit the whole trip!!!

As I entered the fullness of the Hunter Valley the magnitude of the wine production in the region became readily apparent: vineyard after vineyard.  Some were small and there were others whose names even I recognize: Lindemans and Brokenwood Wine

Opportunities for tasting were many... not something I wanted to do alone... and so, I headed to the 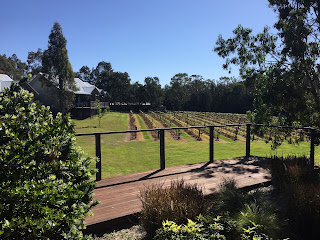 Hermitage Lodge, checked in, went for a swim and here I sit... enjoying the view and sharing a rather short story of an incredible day of riding...  my fourth and final picture of the day.

A little later I'll head down the road to a pub and grab some supper and then return to the room and watch the sun set over the vineyard.

Tomorrows journey will take me back to Sydney via Wiseman's Ferry.  It's only a trip of 234km.  As a result, my plan is to take my time leaving so I miss as much traffic in Sydney as possible.  After dropping off the bike I'll make my way to The York where I will meet up with Peg and on Saturday we'll make our way to the Conference venue and begin the last segment of this date-line equator crossing adventure... on the Sabbath Road...

PS: Just back from Harrigan's pub which is just down from where I am staying.  I had beef stew with mashed potatoes and green beans.  Not bad... but way overpriced - then again, so is everything down here!!! 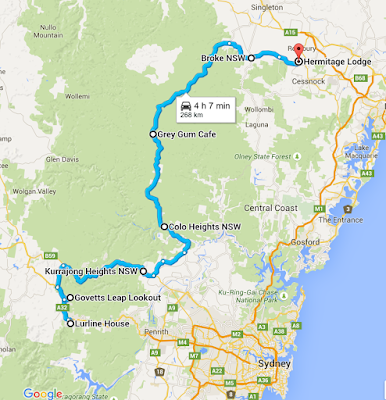