September 07, 2015
Well, I thought that with the morning beginning with a rainbow that I might be in for some good 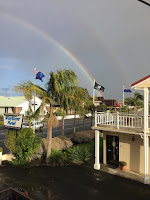 weather... It was not to be. I no sooner took the picture and it started to rain!!  Not to be defeated I set out toward the north with Cape Reniga as the first destination of the day. 40 minutes later I turned around.  I was drenched!! Squalls were blowing in from the west and if the rain wasn't enough, the wind threatened to blow me off the road - or at least into oncoming traffic. My life is worth more than a visit to a lighthouse at the end of a spit of land jutting into the Pacific Ocean.

Back on the outskirts of the town I'd just left I stopped at a cafe and had a hot breakfast. As I was eating I was joined by an individual who was taking the tour bus to the Cape and he was going to walk the 90 Mile Beach from the tip back down to the South Island.  Pretty extreme is you ask me...!

Filled with bacon and eggs with a deep orange yolk I headed south in a gap between showers... and the gap did not last long... before too long I was in the thick of the rain again with the visor fogging up and the crotch of my pants getting wet - the only place that gets wet besides my feet!!

I drove on and soon exited the shower only to enter another one... and so was the day all the way along the coast.  It was as if I had this little grey/black cloud following me and any time the sone threatened to come out the clouds opened and I got rained on. 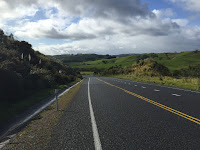 And so I did what I came to do: I rode.  Because of the rain and the emotional space I was in I did't stop to see the glow worms, I didn't stop at the geysers or the gum digging... I didn't even stop for the fun park... I just rode and when the road was dry and did my best to enjoy every twist and turn I came upon... until the third accident.

I was just north of Whangari when I noticed a truck stopped ahead of me in the opposite lane.  It had its signal on to turn right into a drive way across my path of travel.  As I passed and was along side, a white van struck the back of the farm truck shearing off a corner of the box, spinning the truck into the lane behind me and I saw, out of the corner of my eye, the white van nose into the ditch...

By the time I pulled over there were a couple of other cars stopped and I made the decision to move on... shakily I put the bike in gear and set off wondering if that was three of nine lives...

Seriously though I was very shaken and still am.  Shaken because I am so far from home.  Shaken because I am alone.  It took me a bit of riding and a conversation with a friend to figure it out... but in this moment I know why I am so shaken - its because I am feeling so vulnerable... these wrecks in a very physical way have brought me to a place of recognizing the vulnerability I find myself in in my larger life...

With a brief stop in Whangari and a walk along the inner basin I came to the conclusion that I needed company.  I needed to be in the company of another human begin.  This was confirmed a little later as in a texting conversation as I sat on the beach at Waipu Cove.

I am feeling very much alone - and lonely - and with good reason, given all that has transpired in the past few days,

Initially I reached out to my couch surfing host to see if I might stop there again.  Not hearing back from her, I realized that Peg may still be in Auckland... and so, after a couple of text messages and a call to the hotel where she was staying, at 8PM I met up with Peg and she has, as only a good friend can, over a beer this evening, walked with me through the experiences of the past few days and helped me begin to wrestle with some of the deeper feelings of my heart. 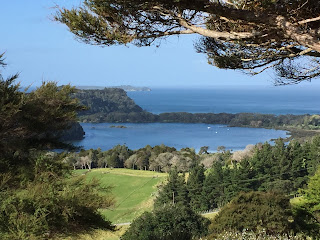 eased.  We've made plans to spend the day together tomorrow and on Wednesday she flies off to see the penguins and I'll return the bike and plan for my departure on Thursday...

A wise woman said to me... there are no tests on this journey... but there my be lessons... and so... I begin to identify the lessons:

"You don't need to travel 15,000KM to see a pretty beach..."
"Worry changes nothing - except your own anxiety level..."
"Being alone and feeling vulnerable is a scary place to be..."