Final Moments of the First Day of My 50th Year... 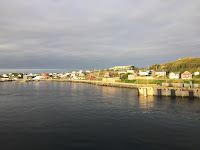 What a day it has been!  What a gift!  So many moments of delight and joy, pleasure and feeling cared for!

After finishing the blog entry from this morning I made my way to the restaurant on the ship and was soon afterward joined by Greg and Dave.  We'd shared some wonderful conversation the night before in the bar and arranged to meet for breakfast.

Greg is an oncologist and Dave is an IT specialist.  I'd pointed out some roads that I knew they would enjoy and over breakfast we shared more of our stories with each other and found common values and other points of connection.  Its amazing what happens when you open yourself up and make yourself vulnerable to strangers... 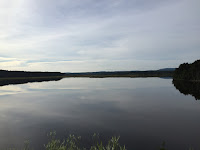 With breakfast done and farewells shared it was off to the decks below to suit up and head out.  I was about the 20th one off the boat and within 40 minutes I was leading the pack... its just the way I roll...  Being in the lead, I soon turned off onto the 405.  Hey, the sign said "Scenic Route" and scenic it was.  I headed west to St. David's and then north along the coast to Jeffery's and then on to Robinson.  I continued past Robinson - optimistic that the GPS was wrong and the road continued on past Fishell. No such luck.  I had to backtrack.  Beautiful just the same.

By the time I got back to the TCH (Trans Canada Highway) the ferry traffic was long gone and I had
the road to myself... just me and my thoughts... 49 years past.  Wow.  Its been a ride! 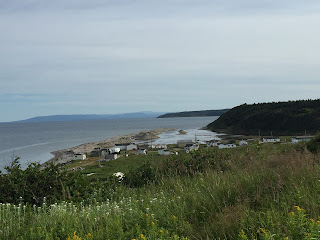 At the 461 I turned east again and headed toward Flat Bay where I found Walter eating his breakfast getting ready to take on some tasks around the house.  I sat with him for a bit and we made enough noise that soon Melita was up too.  We made plans for me to come back and stay with them on Thursday night before I head on to St. John's via Baccus and nice long gravel road!

With plans made for later in the week I headed on to Corner Brook and was pleased to find out that the kind folk at Marblewood Mountain Inn could check me in early!  Yes!  Shower!!  But not before a few phone calls and taking a moment to begin to consider the birthday greetings that were being showered upon me!

Feeling fresh and new (as new and as fresh as a 50 year old can feel) I headed off to the Pepsi Centre where the 42nd General Council of the United Church of Canada is meeting - and thus began a day that has reminded me of again and again how deeply I am blessed by this community I am part of - for at almost every turn I met someone with whom I have connected with at some point over the course of my service within the Church.  Hugs and handshakes abounded... and my phone just kept dinging and dinging with each new Facebook message posted on my wall, text message and Facebook Messenger message.

I've lost count.  But I have tried to respond to each one personally - because each one of your is important to me in a unique way.  Some of you I've not seen for years - but your greeting evoked a memory... and for that I am so thankful. 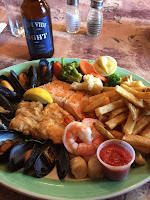 Eventually, overwhelmed this introvert needed some time alone so, while
heading to one restaurant I recognized one that Al and I had eaten at on our Trans Lab trip a few years ago.  Sitting down I told the waitress that I'd last had breakfast there four years ago and her reply... "Well you sure took your time coming back!"  She treated me so well!  My dinner was delicious and when I asked for pie - she brought it with a candle... she must have heard me on the phone with Justin or Al when I spoke of having my birthday feast...  I was so touched!  The kindness of strangers!  I asked if she was going to sing for me... and her reply, "And loose all these paying customers?  Not on your life dear!!" 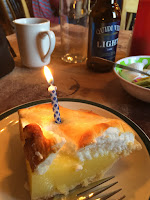 With dinner and phone calls to those I love completed I headed back to the Pepsi Centre where the evening event was a celebration of the 90th Anniversary of the United Church of Canada.  I can't begin to retell in detail what was done here... suffice it to say that a series of vignettes were shared in ways that allowed us to laugh at ourselves and at the same time give thanks for the wonderfully diverse community that is ours in this United Church of ours...  I am sure there will be clips online.  Certainly worth watching.  I laughed and laughed and laughed!

Before heading to the pub I sat on the hill overlooking Corner Brook and watched the sun set - again - overwhelmed with the beauty and goodness of the day.  I think Mark is onto something... he suggested that I follow his example of celebrating for the next 50 days - one day for each year!  I'm beginning to really like that idea!! 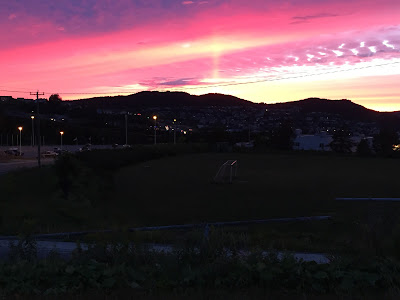 The Student Union pub on campus is called The Backlot... and boy was it busy this evening.  I limited myself to two beers over the course of an hour and a half while sitting with a group of Maritime Conference Commissioners who before I left had all 75+ folk in the bar singing Happy Birthday to me...

The only way to describe the way I feel in this moment is: loved.  Thank you!  It does a body well to be the recipient of greetings that celebrate your birth and look forward to another year.  Each greeting was a reminder of a connection, a relationship that has had a role in shaping and informing me... and in which I hope I have made some small contribution to the well-being of another...