August 02, 2015
I awoke at 3am.  Nope.  Too early.  I woke again at 4am.  Ok.  Let's hit the road.  An hour later, the tent and all the other gear was packed on the bike and I found myself giving directions to a lost biker who needed to find his way back to the party that was still going on!!!

As I drove I remembered the day 22 years ago when Justin Cameron Bruce came into the world at the Peter Laugheed Hospital in Calgary.  I remember what we had for supper the night before... I remember the gratitude of the day... the beauty of birth, of newness and hope and new life... and what a life it has been: a beautiful, handsome, gentle and thoughtful young man who has made so many good choices in life!  Happy Birthday Justin!  Love you lots!!!

The first tank of fuel got me to Kingston.  Along the way I sent a message to Greg Rodgers asking if he wanted to have breakfast.  Apparently he does not check his phone messages early on Sunday morning... I knocked on the door and surprised them all!

Greg had my first coffee for the day in my hand within 5 minutes and introduced me again to his lovely daughters after which I drug him away for breakfast and a catch up conversation.  With my belly full and my heart full from good conversation I filled the fuel tank and set off again. 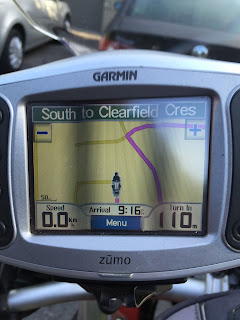 Leaving Kingston the GPS told me that if I drove straight through that I could be in Sackville by 9:10PM (Atlantic Time).  I was tempted.  And I made a good run at it!

This bike is hard on the butt.  Not because the seat is particularly troublesome - but because the fuel tank is so large.  My old bike was good for 300km and then you got a break because you needed fuel. This bike is good for a minimum of 500km... by the time you need gas your ass is almost too sore to get off!!

I made good time to Montreal.  I told my friends brother that I would be there for 12:30PM based not he GPS calculations... and I was there by 11:58AM.  Cars just seemed to move out of my way.

Bruce and I had lunch and a good conversation as we got to know one another... nobody told me he was that tall or had a handshake like a vice grip!!!  Always good to have another friend - especially in Montreal where I tend to get lost any time I drive through!!  Helen and Andrew can attest to this!!

I'd filled the bike up before I met up with Bruce so after lunch and a farewell hug, I kept moving east!  By now the sun was high in the sky, the traffic was slow and I was hot.  Where are those little lakes when you need them Duane and Cindy!?!?

The heat forced me to keep a constant speed - and cars just kept moving out of my way!

As 6PM approached I was on the outskirts of Rivere-du-Loup... do I push on or not?  It looked like rain... I had enough fuel to make Edmundston... I was tired... I wanted to get home... my bum was sore... my bum won out.  I pulled up to the Best Western beside three Harley's at the front door... little did I know what this was a foretaste of...

I got into my room.  Showered and connected with loved ones at home to tell them I was safe and off the road... and while eating my dinner came to the realization that I'd left one biker gathering and rode into another: the Hell's Angels and the Red Devils (about 40 of them) were staying at the motel...

The plan at this point is to be up very early tomorrow so as to make it to Sackville by noon.  Justin and Zack are heading back to Halifax around 3PM and I hope to take them for a late lunch or early supper before they head back as I will not likely see them again before I head off to Newfoundland next Saturday... on the Sabbath Road...