August 04, 2013
A sign I saw at Lincoln Square in Gettysburg... somehow I think there is a
theme developing to this trip!! 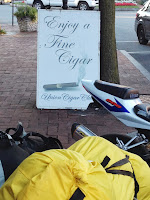 This morning was an awesome morning of riding.  Riding west on US 202 with the rising sun on my back made for a bit of chilly start - but was it ever beautiful.  Sweeping turns, hills rising from the river banks and no traffic!! 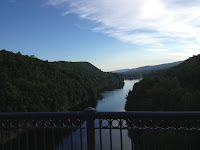 An hour or so my laziness from last night came to fruition - I needed gas and there was none to be found.  It is Sunday morning and Millie said the nearest fuel is six miles out of my way... do I risk continuing west or do I turn north?  I did what as I a male have buried in my genetic code not to do... I stopped and asked for directions. 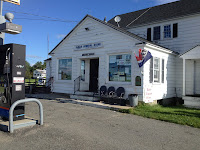 The helpful man told me to continue west and I would find one sooner than travelling the direction Millie suggested... he even offered to give me the last of his lawnmower gas... by the look of his lawn, the gas had probably been there since last spring!  I declined and continued west until I came upon this welcome sight: Sangar General Store!!

The East Indian lady, who owned and managed the store while her husband drove a lumber truck was most willing to share in conversation as I sipped a coffee.

At Shelburne Falls Mille turned us south on a local highway and then we swung westward again on US 9 and up and over and through the Berkshires.  What beautiful country!!

Just past Pittsfield State Forest I came to Lebannon Valley and the name was sticking in my mind... I couldn't figure out why... and then I cam upon Lebannon Valley Speedway!  It came to me!  Blair Lewis who we open our wallet to so as to keep our cars on the road (AKA Mechanic) races here regularly and I've seen the stickers on his car!  I briefly toyed with the idea of turning around and going to see if I could find him...

But I continued on following what was now called the Mohawk Trail.  The scenery was so enjoyable!  Little towns and villages, folk making their way to Church, others on the ball diamonds and lots of people setting up and visiting flea markets.

Reaching Margaretville I knew I'd been this way before - travelling the other direction!  I'd planned this!  Highway 30 around the Pepacton Reservoir on the edge of the Catskill Forest Preserve such an enjoyable ride last year as I returned from Scanton, PA that I had to do it again... and so I did!

The turns are tight and the views are breathtakingly beautiful as the road winds around the lake and climbs and clings to the hills rising into the midst.

At Hancock I stopped at the Circle E Diner for Brunch!  Eggs (yes I had two Anna!!) home-fries and ham... and whole wheat toast!  Boy was it good!!! 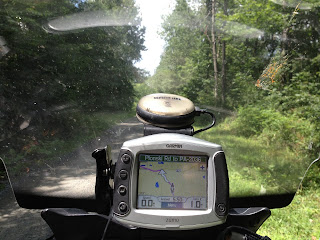 interesting!  All of a sudden Millie started leading me down gravel roads... at first I couldn't figure it out... I was just enjoying the ride and the change in pace!  And then it dawned on me.  When I stopped and turned of the GPS it must have recalculated and rerouted to the destination and didn't go back to the pre-planned route... and I hadn't set it to avoid gravel roads... as a result I was getting closer to nature!  Little did I know how close I was going to get!!

I continued to follow Millie's directions and every once in a while she would lead me on a goat path as we hopped from one paved road to another!  It was making sense!  I could see where we were heading and it was going to be fine... until... well, I'll let the pictures tell the story!


I dusted off my pride, buffed out the new scuff marks and road on - thinking, "Next time I do this road I am gonna have knobbies!!"

Reaching Hop Bottom, when Millie wanted to do another off road excursion I fixed her!  I reprogrammed her: I checked: Avoid Gravel Roads and unchecked: Freeways, Toll Roads and Highways... and soon we were moving at a high rate of speed again: due south towards Gettysburg!!

Interstate 81 moves along at a good clip - BUT - there is a need for a new sign: 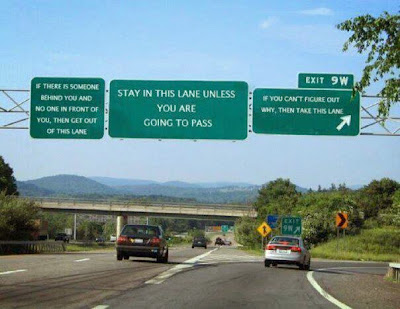 Oh my goodness!!  People just put their car on cruise and yak on the phone and are totally oblivious to the long line of cars that pile up behind them! 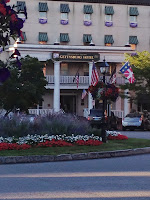 The traffic got a little thick at Harrisburg but before long I was through and arriving in Gettysburg
looking for a place to lay my head for the night...

A swim, a shower, supper at Ruby Tuesdays (steak and salad bar) and a run to Wal-Mart for a few items, including a towel for camping and some clothes for washing the bugs of the windscreen... and then I decided to go for a little trip into Gettysburg proper. 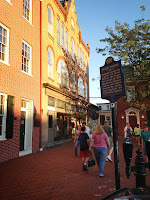 Walking around Lincoln Square I was reminded of the wonderful time Anna and I had in March, especially when I saw the Ghost Walk Tours!  These old town are so filled with history, so much to see and take in!  After a little stroll and a few pictures I return to my lodgings, washed the windscreen and tried to buff out the damage... and then came and wrote these words for your entertainment!! 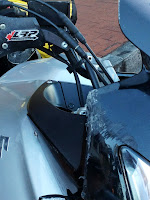 I am noticing that I'm not reflecting much these days... on the one hand I think that's good - my mind needs a rest, time to just enjoy the riding and the scenery, on the other hand, I think the Sirrius XM Radio I now have on the bike is turning my mind to mush!!  Though I must confess, it sure is nice to roll down the highway listening to tunes, Canadian news, and the odd comedy channel!

Tomorrow I'll be off early to visit the Gettysburg National Military Park.  After that I'll head south into West Virginia to Harpers Ferry and on into Shenandoah National Park on the Skyline Drive and we'll see where we end up tomorrow night!! 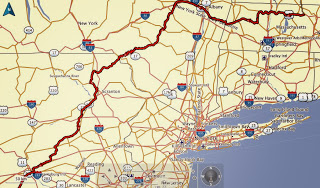 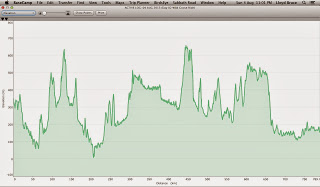