August 11, 2013
I slept through until 5:30AM and was pleased to discover that there were still no line ups for the
showers!!  With over 900 people camping in a space with 4 showers those are pretty slim odds!  Alas – by the time I came out there with six folks waiting to get in!!!

Showered and as fresh as a daisy I headed over to the Still Mountain Pub to use the WiFi only to find that it was down for some reason… so, I typed away in a word document thinking I'd get a connection at some point... it never happened!

At 7:30AM I made my way to the community centre and had the by now usual breakfast of bagels, hard boiled eggs and coffee... and then made my way to the parking lot: a three acre grass field partially filled with cars that needed to hold the two hundred or so more that would come today!

My partners for the morning were three students, members of a band who had ridden their bicylces the length of the Blue Ridge Parkway to be here!  They were still talking about the trip and comparing their blisters!!!  For the next four and half hours I got to "tell people where to go and how to get there" all with a big smile!!  On about 10AM the sun was getting hot and I asked one of the shuttle drivers to stop by my tent and pick up my hat... and along with my hat I received a glass of lemonade... it was such an unexpected treat!! A gift I neither asked for nor expected - just like grace!

At 11:25AM I told Dough (the Team Leader) that I was done.  I was done.  Smiling, he said, "You've got five minutes left..."  Walking across the still wet grass I laughed, "So, fire me..." And I walked off to take in Ani Zonneveld presentation on Progressive Islam.  You can read all about it here.  Ani and I had a brief moment to chat about my work at Springhill and the relationship I enjoy with the Imam there, Zia Khan - who in my experience, while he may not identify with all of the principles Ani identifies as "progressive" is very progressive in his own right!

Back at my tent in the shade by the river I warmed up my soup and ponder the folk I had met that day... so many different types of folk: a rainbow, a patchwork quilt of family types and sizes, a kaleidoscope of abilities and giftedness... all coming to take part in an event that proclaims itself as a cross-road of spirituality, art, social justice and music!  Wow!

With gratitude for all that has been filling me I headed back to the Still Mountain Pub for an interfaith discussion involving Ani, Brian McLaren and Stuard Davis... there was no room in the inn... or more specifically, on the outdoor patio where the discussion was to take place!  I had to sit in the air conditioned comfort of the bar - and because the windows were closed I was subjected to CNN for 20 minutes while I hydrated myself with Cascade Kriek Ale...

At 2:30PM I had every intention of taking in an interview of Brian McLaren by Krista Tippett... but the shade called... and another cool beer. 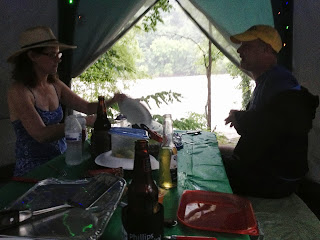 I sat with John and Dan we swapped stories for the better part of the afternoon only to leave to go to the Main Stage to here William Barber preach!  Wow!!  His sermon title was “We” is the Most Important Word in the Social Justice Vocabulary…  and did he preach!  Using the story of Eziekeil he did an amazing job of preaching in manner in which any person of faith could connect with his so very powerful words!


We' Is the Most Important Word in the Social Justice Vocabulary. The issue is not what we can't do, but what we CAN do when we stand together. With an upsurge in racism/hate crimes, criminalization of young black males, insensitivity to the poor, educational genocide, and the moral/economic cost of a war, we must STAND together now like never before. 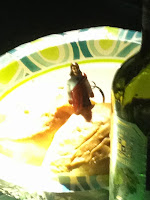 Following Barber's sermon I ended up back at Dan and John's tent and before too long another 1/2
dozen folk were there and we had a pot-luck supper!!!  And Jesus-on-a-keychain was there was well!  It truly was communion: sharing the stories of our lives, values and goals, stories of faith and hope... and all this led so appropriately into an evening of music with River Run North followed by the Indigo Girls!!

By 11:30PM my phone was full of video and much to Anna's
disappointment I didn't get to record Closer to Fine... the song we belted out together on some of our early road trips!

That’s all for now… on the Sabbath Road!