Today was the latest I have been on the road so far on this trip.  I woke at 3:30AM (at the call of nature) and quickly fell back asleep until 7AM.  When I looked out the window disappointment settled in.  It was so foggy I could not see the restaurant across the street!   I slowly began to pack things up and as I putting some stuff away the chap in the next room made the remark, “Pretty socked in…”  I replied quickly, “It’ll clear!”  He shot back, “You think so do you…?”  “Yup,” was my reply, “we motorcyclist are an optimistic crowd! 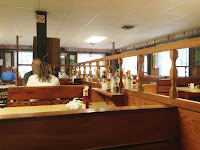 I started the bike and road it over to the gas station and filled it up and then had breakfast – vegetable omelette that may as well have been swimming in butter.  It was good, but the healthfulness of the vegetables (yes, I did have bacon on the side) was lost in the butter it was fried in… oh well, when in Rome (or in this case, Fancy Gap!).

As I was eating I saw the most tender sight that stayed with me all day.  An elderly couple came into the restaurant.  The lady was clearly the younger of the two.  The man had a cane and was holding on to every avaialable surface to get into the restaurant – truth be known, he looked a little disoriented as well – this wife was so patient.  She went to the table, put down her purse and then came back and gently helped him to the table – smiling broadly and fully in his presence.  And he smiled back.  The was such a tenderness in their exchange, clearly a deep love for one another. 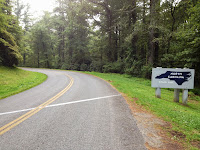 As I was listening to Q on CBC radio an artist whose album was released today (I’m no good with names) but who had gone through a hard time with her partner and fellow band member was talking about what it was to be in a long term relationship: about committing to your partner and committing to yourself in ways that allowed each to flourish and grow.   She (I think Amanda was her name and Jean Paul was her partner) was so clearly struggling with the break in their relationship and I thought of those two seniors in the restaurant… I bet we all could learn a thing or two about commitment from those two… 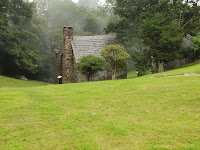 encouraged me over the past 25 years.  There are times when I look back when I wonder why she didn’t walk away… and then I realize that I see the same look in her eyes that was in the eyes of the lady helping her husband to the table – love.  Love rooted in commitment.  Love for the long haul… and I can only hope she see the same in my eyes. 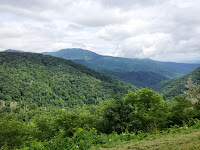 I spent the afternoon setting up camp and getting to know my new neighbours: two seminary students from Drew, a youth pastor and a group of youth from Raleigh, NC, the volunteer coordinator, Tamara, Caroline a volunteer at a Mental Health Clinic in Raleigh and a woman and her family and two exchange students from France on the other side.  The conversations have been so engaging.  Folk know this to be a safe place to talk about issues from progressive and inclusive perspectives.  Tibetan prayer flags surround many of the campsites, yoga mats are as common and sleeping bags and folk are constantly introducing themselves, making connections and building community.

After supper at the Stillwater Pub and a brief Facebook chat with family I made my way back to the festival grounds where I found a fire to sit beside with some new found friends.

By 9PM it was dark and I was ready for bed…