As evening falls, so does the rain... Wild Goose Ride (Day 06 Part II)

August 09, 2013
At 11AM I went and officially registered.  The lineup had begun!  It was so amazing to stand in a line 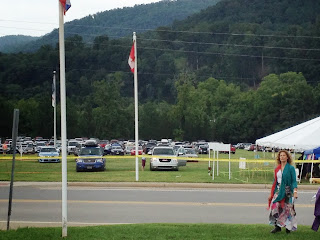 up and so quickly find points of convergence with individuals from various parts of the continent.  We may have all come for different reasons, but there was a commonality among us that was easily identifiable.  And the parking lot filled up...

With registration completed I began to wander around the site and and meet some people.  I met Eric and Steve two of the key movers and shakers involved in Darkwood Brew a progressive, ancient, mystical Christian internet television program.  Before too long we were finishing each others sentences and making connections to wider issues that each of us is wresting with.

Next I met Chris - a single man from Virginia who works as DVD programmer.  Our conversation began with "What question(s) did you bring with you this weekend?"  Chris shared with me some of his struggle around understanding and accepting gay and lesbian folk in the Church.  I share with him some of my journey as we shared a beer and we ended our conversation with a walk over toward one of the venues.  There I met up with Caroline again and we spent some time talking about the schedule for the weekend and some of the things we were going to take part in - and before we could end our conversation, two of our neighbours (between Caroline's tent and mine) Dan and Bob invited us to their table for Fajita's!!  What hospitality.  A young couple was there with their small daughter and while mom ate, dad kept the little one away from the river... they will have their hands full and I am sure there will be many eyes watching the little ones around the river!!

At 7PM the Official opening took place and the group was addressed by one of the Elder's of the Goose, Phylis Tickle.  With the openning done I made my way over to the Performance Cafe which is being hosted by Darkwood Brew for a dialogue between Frank Shaeffer and Eric Elnes.    Shaeffer is a Phoenix Affirmations and the journey he and others undertook to walk these affirmations across the country in 2006 with an organization called CrossWalk America. 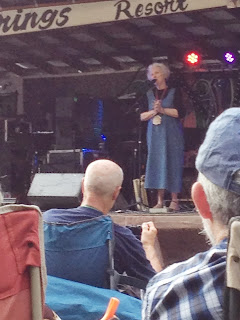 name well known to Americans - not so much to me - but it was interesting to hear these two talk about their respective faith journey's and how they have found points of convergence.  Shaeffer has moved from the right to a place of saying that he now guides all his actions by the following maxim: Does it create beauty?  Does it give love?  Does it find peace?  Elnes spoke of the

By 10PM I was toast and it was starting to rain... so, I headed of to my tent, crawled in and promptly went to sleep.

I woke at 3AM to use the bathroom and decided that as the showers were likely free then that I would shower now... glad I did.  When I got up at 7AM the line for each shower (4 of them) was 15 people deep!!! I will likely do the same thing again tomorrow!!!

It's 9AM on Day 07 of this Wild Goose Ride and I am now 48 years old and as of 5 minutes ago I have received 58 birthday greetings on Facebook including a wonderful (albeit short) conversation with my lovely wife of almost 25 years and one of my two handsome sons!  I am blessed and so very thankful to have such wonderful people as part of my life!  Thank you.  Thank you.  Thank you.