Having enjoyed my birthday dinner at the Still Mountain Pub with a couple local craft beers I made my way back to the Main Stage where Aimee Wilson was playing followed by Phil Maderia – all I can say is WOW! 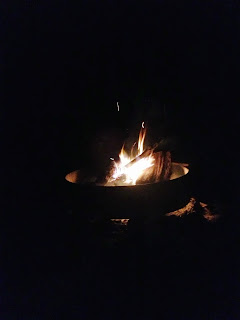 Maderia is a very accomplish Blues player and singer songwriter in his own right, having played with some pretty big names along the way too!  The guitar rifts, the steel guitar and violin together with Maderia’s soothing and chillingly challenging vocals had the hair on the back of my neck standing on end… and then it started to rain… so I gathered my stuff up intending to head to bed – but – by the time I got to my camping area the rain had stopped and the neighbours were working to get a fire going!

I joined in with their efforts and before long we had a nice blaze going – but not before one of number had gouged themselves with the wedge and another had opened a box of wine to share around!  By 11PM I was on sensory overload.  So many fascinating and engaging conversations, and my brain was exhausted – as was my body!