August 03, 2013
The day started as planned.  I slept through to 6AM and with a quick shower, and even quicker bite to 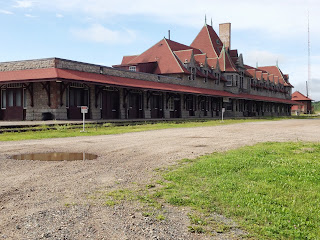 eat and a final kiss good-bye I was off.  It was overcast and there was the odd drop of rain but it was looking like it was going to be fine day... and then I notice that the GPS wasn't tracking the roads - it was showing me "as the crow flies"  Darn, I guess the routes got corrupted when I loaded them last night... easy fix, just punch in a destination and let the GPS route itself...  Past Freddy... it was 9AM!  I really debated about stopping at the Farmers Market... a sausage, a samosa... no, keep the move on!

Passing through McAdam I had to stop and get a picture of the train station - built when life was simpler, and the nation moved and had its being on the railway tracks!  There must be a story as to why the station is so large!  I must Google that!

Another day, another border crossing... or at least so I thought!

As I pulled into the Vanceboro US Customs area the officer yawn and slid open the window and asked the usual questions: Where are you from?  Where are you going? Whats your occupation? Anything to declare?

Now, before I go on... those of you who know me well know that I used to smoke cigarettes... a pack a day before Justin was born!  Those of you who know me a little bit better know that I still like to smoke the occasional cigar.  In fact one good friend and I shared a box of them on the last trip and I had some of those left over so I brought them along... and, another good friend brought me back a box of five hand rolled cigars when he was in Cuba this past spring... do you see where this is going?

Anything to declare?  Oh yes Officer, two packages of Colt cigars.  They were bought at the Duty Free 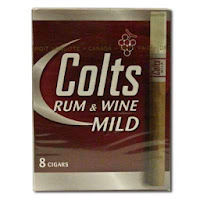 shop early in the month, went into the US and came out and now I'm taking the last of them with me on this trip... the Officer looked bored.

And that was how I lost the hour I was about to gain by crossing into the Eastern Time Zone!

Officer Bard was very professional and almost apologetic... as he searched and searched for the proper code to identify the four Cuban cigars that he was about to seize from this neon traveller who calmly paced the carpet... paced the parking lot (and smoked one of the legal cigars)... and waited... and waited... and waited.... and just when I think he is done (he has spent 40 minutes entering information in the computer and calling Calais to get a Supervisors authorization number... Then!  Then he pulls out a file folder and has to write it all out on hard-copy!!  An hour later he passes me a single page and asks me to sign in acknowledgement that US Customs has seized my four Cuban cigars...

As I paced and waited by times I felt like the inmate that some will know who got scooped and taken to the Hole for passing a cigar over the fence surround the Private Family area to another inmate...all fo want of a smoke!  I think its time to give up smoking again!!

With that little adventure behind me I passed quickly through Lincoln, ME and jumped on I95 and headed south.

Just past Hampton, NH I swung west and followed the 101 for a while, bypassing Manchester and as my derrière began to loose all feeling I knew it was almost time to stop.  I debated staying in Peterborough - but there did not seem to be anything that caught my eye.  I blinked and missed Jaffey.  The GPS told me there was a motel in Wincherdon... there was, but there was no room - at least not for me!  In broken English the lady told me that they did not welcome motorcycles... bad parties she said... who was I to argue?

Millie (what I call the GPS when I like her) told me that there was a Super 8 in Gardner, MA and that is where I sit... I had a healthy supper at Friendly's (Sesame Chicken Stir Fry over Rice) and looked longingly at the waffle french fries and build your own burger... and then I noticed how much room there was between my belly and the table and enjoyed another sip of lemon water as I speared a green pepper that was hiding under strip of chicken! 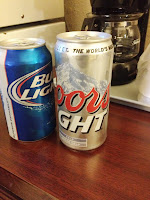 I'm finishing of the day with a couple of beers that matches most of the road that I've ridden today: slab, blah, boring and flat!!  There was a nice selection of craft brews next door... but they would have went so well with one of those Cubans... I just wasn't in the mood!  Grieving maybe!?!?  I bet those Cigars go up in smoke... and I don't mean in a controlled burn as part of destroying seized goods!!!

Tomorrow's plan calls for a more sedate pace, some more interesting roads and a hundred or so less kilometres - and if all goes according to plan I should end up somewhere near Gettysburg, PA