Wednesday evening following supper I called Phil, my colleague from PRC-L who was storing my 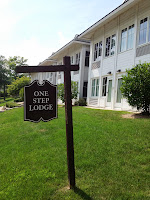 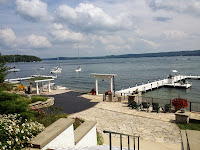 Once we established that I would in fact fly back to Asheville on Thursday and arrive at 9:40PM and that this was the time I had informed him earlier… I felt a bit more connected.  Once again I knew what day of the week it was!

Looking back now I am surprised that I was able to go as deep as I was and connect as fully with others in my small group as I did given that other issues that were crowding my plate.  Email after email kept coming in and I was finding myself unable to not respond… and so I sat with that: asking myself “What is going on here, within me at this moment?”  I found the silence so helpful – the quiet created a space for me to simply be – and to begin to realize that I don’t have all the answers and I don’t have to be the first one to offer a solution to the first or even the eleventh issue of the day… simply showing up and bringing my best self is enough. 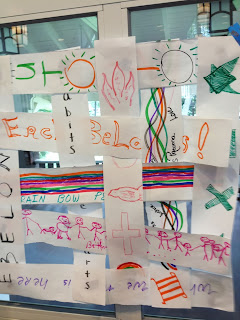 metaphor in dreaming and community life.  In a group of five we were given simple tools: markers, paper and tape and invited to create something that spoke to us of the experience of the event, the learning we were taking away, the wisdom we had discerned over the course of the retreat.  And we had 20 minutes.  With four folk with whom we had not spent any time with over the course of the retreat.  After a quick conversation where we identified some of what was rising in each of us we began to create a weaving – had we had more time would have become a basket.

Let me offer my reflection on our creation: the weaving represents our individuals stories and the stories of our communities.  All of these stories are woven together.  We touch one another.  Our stories, our truth, our living of the habits of the heart is all done in tension and it is in the tension, in the creative space where the holy exists and is experienced.  When we weave ourselves together as we have done so in this time we create a space and time that holds the dreams and longings of the world as we know it together… and that’s a holy place. 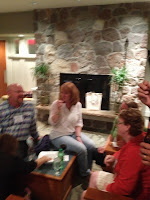 We continued being in community in a more informal way for the rest of the evening.  John, one of the facilitators had arranged for the Bistro to open and we shared wine, Wisconscin beer and three different types of Cheese curds… the Amber beer was awesome… the Wheat ale just so so… and I really don’t know what all the excitement is about Cheese curds… must have something to do with cow tipping in Wisconscin… you just had to be there!!

After two beers and a half dozen conversations I was done.  Done.  Finished.  Asleep on my feet. 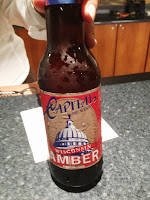 I awoke on Thursday morning and before my feet hit the floor I was in going home mode.  I have enjoyed both events.  I have been comforted, challenged, nurtured and encouraged – but I have also been challenged in staying focused given the many other issues that are needing attention at this time… by 7AM my bags were packed and sitting by the door.  I was checked in to my flight and I was getting the pre-ride jitters.  It always happens.  Something to do with excitement of the road and a nervousness… I will be alone on the road.  The neverousnous had an additional layer this morning.  I found out last night that a 33 year old woman whose wedding I had conducted a few years ago was killed in a motorcyle accident in Alberta.  As I spoke with Anna this morning we tried to find some details… there are few – but they all point to tragedy and sadness.  I am so sad for her and her family – and while it may sound unsympatheic, I offer this with the deepest of care and conern for her and her family: I can only hope that she died in the midst of a passionate pursuit… and that she was living fully right up until the moment she died…  for such is our calling in life. 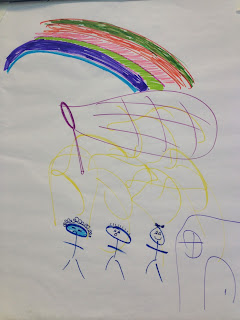 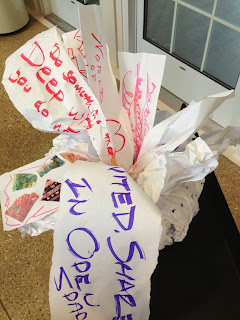 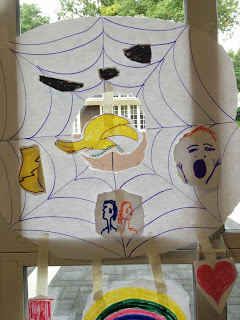 Following breakfast we gathered in community one last time with singing followed by silence as we went around the room and pondered the creations – the metaphors that sought to capture and convey the transformation that had taken placed: the softening of hearts and the growing of habits.  Degane.

With quiet voices one by one we spoke words of affirmation, naming what we were taking with us from this place, others spoke words of gratitude and commitment, and still others offered images of new understandings and ways of being in the world.  I was drawn deeplu into an image offered by one young man.  He spoke of how is his mind is like a map.  His mind creates many possibilitities, many roads and even contour lines and shading that indicate the terrain and possible ways of travel over mountain and valley.  He spoke of the intellects ability to create pathways and roadways the go from one place to the other… but the mind cannot point the way to go.  To discern the direction of travel he must rely on his heart.  His heart is the compass of his being… Degaje

With these words echoing in my heart we were given one final task: to write a letter to ourselves: to write of something that we wanted to be reminded of from this time together in six or eight weeks… Corney?  Silly?  Not in the least.  The moment I put pen to paper the thoughts started to flow… a message from myself to myself – an opportunity to capture wisdom that has been gleaned and offer it again to myself at a later time. Degaje.

With a final chorus and hugs all around it was over… The ride of the Wild Goose has offered courage and renewal for the journey that lies ahead.  Degaje.

I write these words as dark falls at 10,000 feet somewhere between Detroit and Asheville.  I will arrive in Asheville at about 9:45PM, return to Phil and Cathy’s home, pack up the bike, catch some sleep and be on the road home in the morning… if you are reading these words you will know that I found time to post them before leaving North Carolina…

As time allows while I am making my way home I will share with you some additional thoughts and reflections as they have arisen out of some of the poems and resources offered as part of the retreat.

In closing, for tonight, hold me in your thoughts as I travel the road home to those I love…

On the Sabbath Road… Degaje... a word from Haiti that means, "we will make a way..."