(Day 26) On Getting Kinks Ironed Out and Kicking Back...

I was up early this morning, 7AM and on the road to New Dundee home of A Vicious Cycle.  I met these folk at the Atlantic Motorcycle Show and was impressed with their range of offering for adventure touring motorcycles.  Prior to my departure I had purchased a tank bag from them and was pleased with the service I received.  In my phone call to them last night they assured me that they had the parts I needed and that they would be ready when I arrived.  They did not disappoint.

I arrived before the store opened and in short time one of the clerks arrived and we chatted as we waited for the manager to arrive with a key.  Quickly the parts were located and I was on my way to see "Jim" and independent mechanic who operates out of his home.

What a generous and helpful person Jim was!  I drove right into his shop and up onto the lift and he was at work in no time - and he talked as he worked!!  I heard about his and his wife's motorcycle racing careers, and some stories about their travels across the country.

Unfortunately the countershaft sprocket that was supplied was the wrong one.  Jim looked at me and said you have two choices, take my truck back and get the right one or, take my Honda VFR back and get the right one.  What a trusting soul!  I declined the offer to ride his bike and took his Toyota truck back into New Dundee, picked up the right sprocket with a promise to return to pay the difference (my wallet was in the tank bag) and was back at Jim's in under 15 minutes.  By the time I returned he had the rear sprocket replaced and the rear wheel back on the bike.  Another 15 minutes and the front sprocket was on and the chain was riveted on and I was good to go.  All said and done, three hours!  I'd like to see a dealership accomodate someone in that way on such short notice!  Thanks Jim!!

While waiting for A Vicious Cycle to open I had called D.S. thinking that we might connect.  D.S. is a former inmate from Springhill who is now living in the London area.  Unfortunately I was unable to reach him and by the time I got back to Cambridge with the heat and all the excitement getting the bike fixed - I was toast.  I spoke to D.S. on Facebook and took a rain check on the visit.  Again I am sorry - just can't do it.

With lunch in my belly my plan for today is do some laundry (give it to Aunt Irene as per her demands), go to the bank a little later, bug my cousin's kids, cook supper and pack for leaving tomorrow morning. 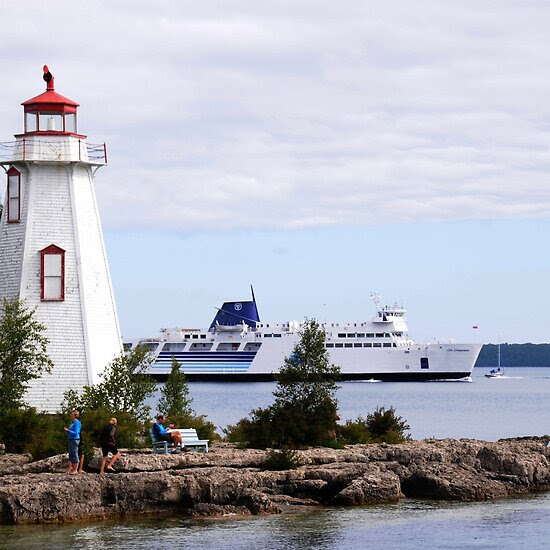 I have a slot reserved on the M.S. Chi-Cheemaun Ferry from Tobermory departing at 11:20 AM.  The GPS says its three hours to Tobermory and Google Maps says four hours.  I'll leave at 6AM or so, it will be cooler and will give me lots of time to get there and if it works out, a few minutes to grab a coffee along the way.

Until tomorrow... on the Sabbath Road...  kicking back in Cambridge, ON