After a very restful sleep last night, waking to the sound of the forest coming alive around me (ok, so I had to put my hearing aid in first), I made my way to the dining room in the main lodge where I made a cup of coffee.

While sipping my coffee I answered a few emails and then planned a loop that would allow me to see as much as possible of the Mt. Hood area before 4PM when things would start here at the centre.  It was hard to choose.  There were so many recommended roads on the Oregon Motorcyclist website.  Eventually I sketched out a route that would take me around Mt. Hood and along the Columbia gorge - avoiding major highways as much as possible.

But it was hard to leave the serenity of this space.  Walking around the grounds in the gathering morning light was so calming.  Light filtering through trees, softly bring a new day to fruition.  Birds rising from their slumber, squirrels already about their business... hmmm... as nice as it is, I know there is much more that I will enjoy seeing.

Leaving Eagle Creek, my first stop was the overlook into the North Fork Resovoir of the Clackamas River.  Down, down, down... the fellow ahead of me sure was burning his brakes up - made a note not to find myself in front of him on the next hill... so, I stopped to take a few photos of people enjoying the water.  There had to be a dozen boats on the lake and at least that many people nearby on the shore fishing.  The folk on the pier looked as if they'd had a pretty good time last night... they were drinking Rockstar at nine in the morning... ewww!

Back on the road, and a mile or two later I am greeted by the entrance sign to the Mt. Hood National Forest.  The smell of the forest was welcome enough.  Cedar and pine mingling in the air.  Sensory over load! 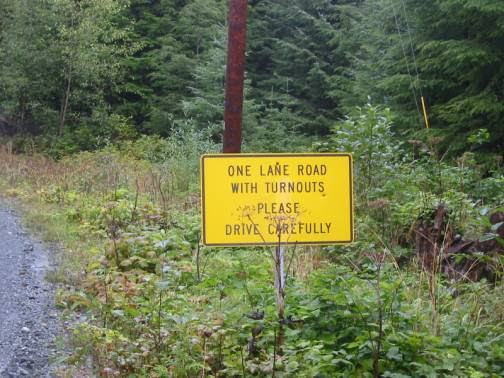 Just past Frog Lake I turned off the 224 onto NF-57 (National Forest Road) and was greeted by a sign like this one: "One Lane Road with Turnouts".  Awesome.  A paved road over a mountain.

I few guys on Harley's roared past me... and 20 minutes later they passed me again - going the other way...  I don't know what the problem was?  The road was in fine shape.  There was lots to look at... maybe they didn't think there were enough people around to be annoyed by their loud pipes!?!

As I continued on I was awed by the remoteness and the beauty... and that the road was paved.  Turing onto NF-58 I continued to climb.  Switchbacks and gentle grades and around every turn something new to take your breath away.

Not 15 minutes later I came up Harry and Celeste from London England.  They had shipped their bicycles to San Fransciso and were riding overland to Vancouver Canada where they would fly home on August 25th.  I passed them and then waited at the crest of a hill for them and we enjoyed a lengthy conversation in the middle of nowhere!  We all laughed at the bikes that passed us then turned around and went the other way!  I shared with them about my trip to London in the fall and they gave me some tips for getting around and made some suggestions about getting to Scotland if time were to permit it.  You never know who you're going to meet where!  Wow!

I kept watching the Estimated Arrival Time on the GPS get later and later.  I was stopping so often to take pictures!  But it was worth it as I do not think I will pass this way again!  There is something about mountains in the distance that remind us of our place on the earth - giving us a different perspective on all that is and how we might arrive "there".  I sat here for about ten minutes.  Not a bug.  A nice breeze.  A feast for the eyes.  A wonderful place to sit and give thanks for all that has been... and be in anticipation for all that may be!

Too soon I turned off NF-42 as it hooked up with Highway 26 and then #35.  I was sad to see traffic again.  I made a point of going slow and letting all the cars and SUV's get ahead of me.  I wanted to road to myself!  It was not to be.  It seemed like everyone and their dog was on their way to Hood River!

By the time I reached Hood River I was starved - and so it seemed was the rest of Oregon!  Hood River is the Oregon equivalent to Banff.  Fancy, artsy fartsy shops and all kinds of fancy restaurants.  I found what I was looking for: pizza at Piedro's Pizza.  $9 for salad bar, a soda and a calzone with three toppings.  I could not eat all of the calzome.  I am beginning to realize that American portion sizes are larger!  Either that, or my stomach is shrinking!! I was now in the Columbia gorge.  I crossed the toll bridge into Washington state because I did not want to go near the Interstate.  Seventy five cents to cross a span of metal through which I could see water... and what were all of those sails out there?  Hand kites and wind surfers!  The water was littered with them.

I had seen folks doing the Hand Kite thing in Bermuda two years ago and was amazed at how fast they move over the water and how in the air they go.  It was no different here.  All of a sudden the signs I had seen in Hood River made sense: "Sails Repaired Overnight"

I saw for a a few minutes and watched the antics.  One near the shore seemed to be showing off.  I thought he was going to land on the roadside at one point!  I think it would be fun... for someone who has balance!  Zack would love it.  Seems to resemble riding the two wheeled skate board thing he has called a stick!!  What do you think Zack??

Unfortunately, after crossing the Bridge of the Gods back into Oregon I was forced to go onto the Interstate for a time - until I reached Rte #30 that paralleled I-84 and passed through a number of State Parks that were located around waterfalls.  The eastbound traffic was backed up for almost a mile with people trying to get into the various parking lots to take pictures of the falls.  Because of this I stopped at only one, Ainsworth where I got a photo of Horsetail Falls.

If you click here you can view a map of all of the historic waterfall that flow into the Columbia River.\\

At Corbett I got off I-84 again and headed south on a series of secondary roads that would take me back to Sandy and eventually to the retreat centre.

It was an awesome trip.  The photo to the right captures the essence of what it is for me that makes riding a motorcycle such an invigorating and exhilarating experience.  Follow the road.  Lean with the forces.  Push back as the need arises.  Breathe deeply and trust.  Around the next corner is the next surprise.  Be ready.

Well, that's all for today.  It's almost supper time here and in a few minutes the retreat will begin.  Below is a screen capture of the route I travelled and an elevation profile of the route.