July 24, 2011
Saturday morning dawned bright and sunny.  Not a cloud in the sky.  With a coffee in hand I caught up on old world news, reading a MacLean's Magazine until the rest of the house awoke.  Loki was a little perturbed that I didn't let him out of his kennel as I went by... but I didn't know what his routine was so I left him in.

Paul was up soon after and with another coffee in hand he took me on a tour of their extensive grounds: two ponds, berry bushes, apple orchard, peach, plum and nectarine trees, strawberry fields, cherry orchard and vineyard, barn, wine cellar, deer pasture and solar heat system.  I should have had my camera and a recording device!  Paul knows so much about so many things!  He told me about the role wasps play in an orchard and how while they can be a pest in the fall, they also help with insect control - and because he does everything organically, their presence is important.  He also told me about netting the cherries and the vines to protect them from birds - and why you need electric fence at the bottom of a netted orchard - to keep the squirrels from chewing the netting and letting the birds in...

In our absence, Jan had made a lovely breakfast of pancakes and fried ham and of course, some fresh cherries - certainly a good meal for the road!  Thanks so much for hosting me and sharing with me you passion for the earth and building sustainable community!  We could have had so much fun together had you not left John Wesley as soon as I came!  All the best to you and your family!  (PS - stupid me, I forgot to take a picture!)

Riding into Victoria was a simple exercise - I'd been here before.  I kind of knew where I was!!  Passing the Fairmont brought back memories of a visit two years earlier when I attended my first national CSC meeting... at the Empress - thanks to Sandy!  Unfortunately it was too early in the day to visit one of the excellent pubs I'd visited that time.  There was a ferry to catch.

I had not made a reservation on the BlackBall Ferry as there was an additional $6 reservation fee to the cost of the ticket if you did so.  Everyone I talked to said that motorcycles had no trouble getting on.  Arriving at the terminal, "Do you have a reservation?"  "No," I replied.  "Well, we may be able to squeeze you on..."

Waiting in line I met a couple from New Hampshire.  They had come across the US via a criss cross pattern and had visited some of spots I hoped to see.  They had been on the road for two months!!  Just yesterday that had taken this very ferry from Port Angeles to Victoria, intending to go through Canada to Alaska.  One day in Canada and they turned around.  It was just too expensive!  Unfortunately for Canada, they were now on their way back to Washington where they would head east via some of the northern states.

Squeeze me on they did.  I was the last one on the boat.  They tried to get another car on - but that poor family had to return to the loading area and wait three hours!!  Boarding the ferry I found myself in a very different mood.  Quiet, withdrawn, anxious and unfortunately this carried over when I arrived on the other side - so much so that I just wanted to get to where I was going.

Not even the sight of the mountains as we approached Port Angeles seemed to inspire me.  I was in unfamiliar territory here - both physically and emotionally.  I thought it best to follow my instinct and take the most direct route to Mt. Angel and get settled there - so thats what I did.

Travelling south on the 101 was quite beautiful, especially as I skirted Olympic National Park along Dabo Bay and south toward Olympia.  At Olympia the 101 turned into Interstate 5 and while I had intended to take some of the more scenic routes, I just stayed in I5.  Mt. Angel was less then three hours away and I just wanted to get someplace where I was going to be for a while.  I think being on the road is catching up with me. 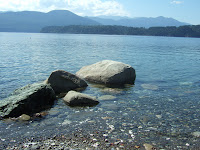 It didn't help that when I tried to use my bank card at a US bank machine it would not work.  I called RBC and they explained that I had used my card at a place where they suspect that a card reader was at work (fraud tool) and as a result they had frozen my card.  After a long conversation some alternate arrangements were agreed to.  But it is safe to say that my anxiety level is up there.

I arrived at the Shalom Prayer Centre at 7:30PM just as the sisters were going into Vespers.  The sister who greeted me offered to go and get the director, I suggested she wait until after prayer.  I laid on the grass near the Sequoia Tree and drank some water and relax.  It felt good to know that I would be here for a while.

On about 8PM Sister Dorothy Jean came and guided me to my room.  As we arrived two other ladies (sisters, one from Vancouver, Washington and the other from Salt Lake, Utah) were also returning to the Retreat Centre.  Introductions were made and we agreed to meet in the morning so that we could make our way to breakfast together.

My room is on the second floor.  I have semi private bathroom (and likely will not be anyone with me all week), a comfortable bed and an easy chair.  There is WIFI down stairs, a tv, a well stocked library and a fridge, toaster and microwave and coffee and tea and fruit in the common area.  Very well appointed.  And huge!

I unpacked, called home and talked to Zack and then made some toast.  Later I talked to Anna and filled her in on the client card fiasco... ah well... c'est la vie!